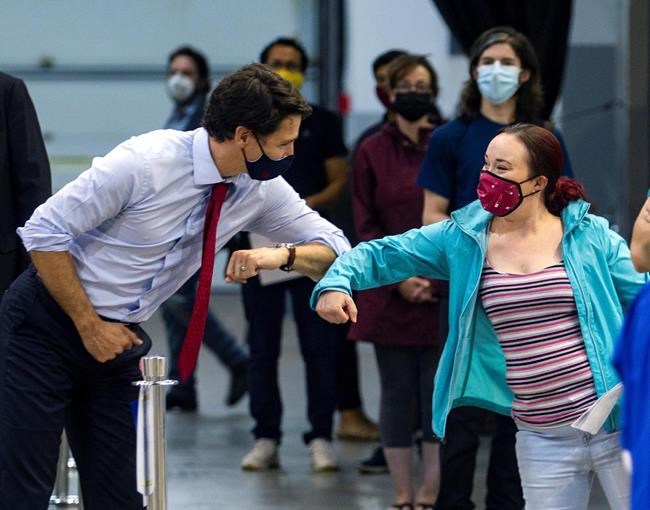 CHARLOTTETOWN — Prince Edward Island has become the third province to sign on to the federal government's national child-care program, allowing it to receive about $120 million from Ottawa for $10-dollar-a-day child-care spots by the end of 2024.

Prime Minister Justin Trudeau made the announcement Tuesday in Charlottetown alongside Premier Dennis King. Trudeau said the deal would apply to children under the age of six.

The deal would also cut average child-care fees on the Island in half by the end of 2022 for children under six and create more than 450 new spots in the province within two years, the prime minister said.

"This ambitious timeline goes to show not only how dedicated P.E.I. is to making life more affordable for families. It’s also an example of how working closely with the federal government means real change that happens fast," Trudeau said.

The prime minister made his announcement Tuesday at the Carrefour de l'Isle-Saint-Jean in Charlottetown, a French-language school and community centre. Before speaking to reporters, Trudeau played briefly with some young children at the centre and spoke to them in both official languages, as they showed him their clay creations and plastic toys shaped like fruits and vegetables.

Nova Scotia on July 13 became the second province, after British Columbia, to sign on to the program, allowing it to receive $605 million from Ottawa to lower child-care fees to $10 dollars a day in five years. Trudeau said his government has also signed a child-care agreement with Yukon.

King recognized that while the deal would create 450 new child-care spaces on the Island, that wouldn't be enough for all the province's children. He said he would announce other programs "in the days ahead" regarding how his government would add more spaces.

"I think it's fair to say our desire here is, in the shortest amount of time as possible, we want to make sure this is available to every child in Prince Edward Island no matter how much money your parents have, or where you live, or what your background is."