Only 0.5 per cent of COVID-19 cases in fully vaccinated Canadians: Trudeau 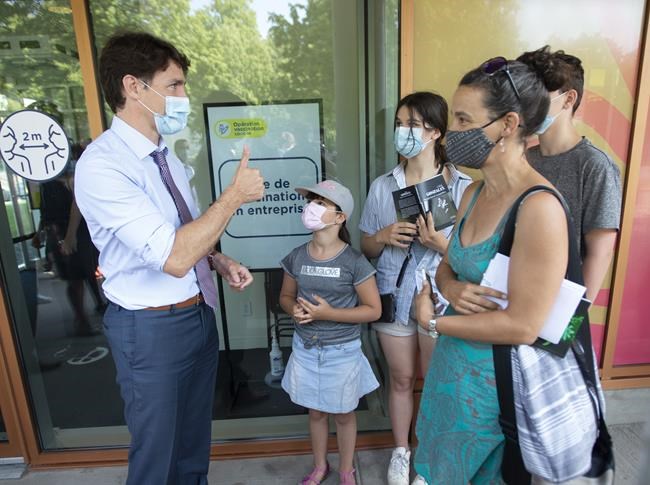 MONCTON, N.B. — Prime Minister Justin Trudeau is urging Canadians who still have not got a COVID-19 vaccine to roll up their sleeves, saying that the overwhelming majority of cases are in people who haven't received their two shots.

Only 0.5 per cent of new COVID-19 cases are in fully vaccinated people, Trudeau told a news conference Tuesday at a vaccine clinic in Moncton, N.B.

The prime minister said the vaccines are effective and safe, having passed Canada's world-class standard for medical approvals.

He also noted they are available: Canada now has enough vaccines delivered to fully immunize everyone who is eligible, working out to over 66 million doses.

"With enough doses for everyone, there are no more excuses to not get your shot. Do it for yourself, because nobody wants to get sick and it's the unvaccinated and partially vaccinated who are getting sick right now," Trudeau said.

"If you're not going to do it for yourself, do it for your loved ones who need to be protected including from the new variants of concern. Do it for health workers who are out there on the front lines and have been for a very long year and a half stepping up to keep everyone safe."

With the Delta variant and other variants of concern circulating, it is likely Canada will see a rise in cases over the coming months, but the spike will primarily be limited to unvaccinated people, he said.

Trudeau said the potential overwhelming of health authorities in some parts of the country is of "real concern."

"We don't want to have to start overwhelming our ICUs and hospitals again with unvaccinated people getting cases," he said.

He pointed out that many countries are only opening their borders to people who have been vaccinated. The federal government is working with provinces on a system for Canadian travellers to show proof of vaccination, he said.

Trudeau also said different provinces are looking at incentive programs to persuade people to get the shot.

The Manitoba government announced last month plans to hold two lottery draws in August and September for all residents aged 12 and up who have got a COVID-19 vaccine. The province is offering nearly $2 million in cash prizes and scholarships for young people aged 12 to 17.

Quebec also announced plans to hold lottery draws each Friday in August where vaccinated people could win up to $150,000 in cash prize or $10,000 in scholarships.

Trudeau made his remarks as the Delta variant surges in pockets of the United States where vaccination levels remain low. Canada has announced that fully vaccinated U.S. travellers will be allowed to cross the border on Aug. 9.

Trudeau said he was still confident in that decision as the data shows that allowing vaccinated people to travel is low risk. He said public health officials will continue to monitor cases at the border, however.

"Nobody wants to go backwards, which is why continuing to get vaccinated is so important for all Canadians," he said.

The outbreak of the Delta variant in the U.S. is now so serious that public health officials want even fully vaccinated people to wear a face mask indoors if they live in an area dealing with a significant spike in cases.

While the vast majority of the viral transmission in the U.S. is happening among the unvaccinated, those rare "breakthrough" cases among fully vaccinated people can result in a comparable level of transmissibility, CDC director Dr. Rochelle Walensky told a news conference Tuesday.

"In rare occasions, some vaccinated people infected with the Delta variant after vaccination may be contagious and spread the virus to others," Walensky warned.

"In areas with substantial and high transmission, CDC recommends fully vaccinated people wear masks in public indoor settings to help prevent the spread of the Delta variants and protect others."

Walensky also warned that authorities believe that if vaccination rates don't improve significantly, the U.S. may be "just a few mutations away" from a highly infectious variant that could evade the vaccines entirely.

Procurement Minister Anita Anand told a news conference in Milton, Ont., on Tuesday than 80 per cent of eligible Canadians have received at least one dose of COVID-19 vaccine, and 64 per cent have got both doses.

"We are, and have been, at the top of the world for a week in terms of the share the population that has received a single dose of vaccine," she said.

"Now, Canada is at the top of the G20 (countries) in terms of the percentage of our population that is fully vaccinated."

Health Minister Patty Hajdu said more work needs to be done to encourage those who have not been immunized yet to do so.

Health Canada and the Public Health Agency of Canada are working on national media campaigns and a $64 million fund to community-based organizations that are helping people who have not got the vaccine yet to reduce anxiety and fears in culturally appropriate ways, she said.

Hajdu announced later Tuesday the government is funding two new projects to encourage young people to get vaccinated. The Canada Safety Council will create an education program for schools, while a youth organization will foster dialogue among young people and their families.

— By Maan Alhmidi in Ottawa

— With files from James McCarten in Washington, D.C.

Note to readers: This is a corrected story. An earlier version incorrectly reported that 64 per cent of eligible Canadians have received at least one dose of COVID-19 vaccine. In fact, 64 per cent have received both doses.