Governor General will agree to a Trudeau request to call snap election: experts 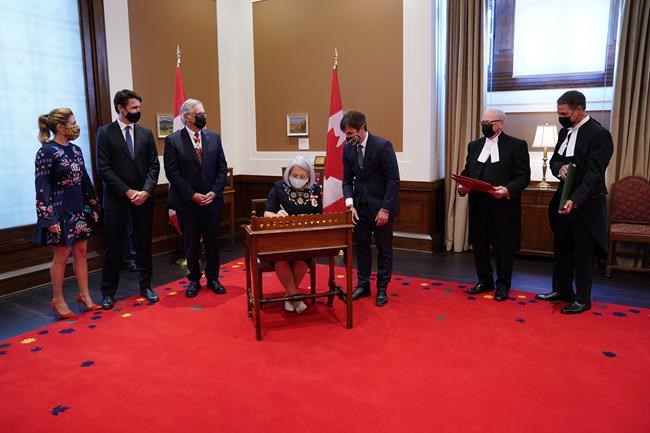 OTTAWA — The long-standing tradition of the Governor General acceding to Canadian prime ministers' requests to dissolve Parliament will practically push Mary Simon to accept a plea from Justin Trudeau to call an election, a constitutional law expert said Wednesday.

NDP Leader Jagmeet Singh has asked Simon to refuse any request from Trudeau that would send voters to the ballot box, noting that the fixed-election law states that every general election must be held on the third Monday of October four calendar years after the last one.

Singh said in a letter to the newly installed Governor General that the law allows for an early election if the government has lost the confidence of the House, but the Trudeau government has won every confidence vote it has faced including on the speech from the throne and the budget.

Ottawa University law professor Errol Mendes said the Governor General as a representative of the Queen has in theory the power to refuse a request from Trudeau to dissolve Parliament. However, that power has not been used for many decades because Canada has been regarded as an independent country from the United Kingdom.

"I don't think (Simon) will accede to the leader of the NDP's request. There's no chance whatsoever," he said.

Anticipation of an early election call is rising as federal party leaders, including Trudeau and Singh, have been travelling around the county on campaign-style tours in recent weeks.

Speaking to reporters Wednesday in St. John’s, N.L., Trudeau repeated his frequent claim that Parliament has been dysfunctional as Conservative MPs have been using "procedural tactics" to delay and block what he said are "important progressive pieces of legislation."

He said the NDP did nothing to help his Liberal government pass laws including one to ban conversion therapy and another to eliminate mandatory minimum criminal sentences.

"(The NDP) could have stood with us to move forward faster," Trudeau said.

"Canadians deserve to have governments and parliamentarians focused on them, not focused on politicking."

However, the New Democrats have said they were a clear and willing partner to expedite the conversion therapy bill and have blamed the Liberals for allowing the legislation to stall in the Senate before it rose for a summer break in June.

Trudeau didn't directly answer a question on whether he believes the Governor General should accept an election call request from him and whether her refusal could undermine Canada's independence.

Mendes said the prime minister has the right to ask the Governor General to call an early election under the Constitution and the fixed-election law brought in by the Harper government did not change that.

He said Singh also noted in his letter the ongoing pandemic and unfinished legislative work as reasons to refuse a request from Trudeau, but there are precedents in the past where the country was in crisis and the governor general agreed to dissolve Parliament.

Annalise Acorn, a law professor in the University of Alberta, said Singh's letter seems to be "political posturing without any serious expectation that it will be acted upon by the (Governor General)."

She said the reasons Singh listed in his letter for why he is asking Simon to reject an early election request from Trudeau are political while the Governor General office is designed to function above partisan battles.

"My guess would be that it's all for show," she said in an email.

"Without even knowing what would be put in place to facilitate voting during the pandemic, Singh is asking (Simon) to assume that the precautions or accommodations would be insufficient."

Acorn added: "There are very strong constitutional conventions in place that would lead (Simon) to think it’s not her business to go against the advice of (Trudeau) on this one."

That refusal led to a constitutional crisis known as the King-Byng Affair, where Byng asked the largest party in Parliament at that time — Arthur Meighen's Conservatives, which held the most seats — to form government.

There was a subsequent election that Mackenzie King won after campaigning on the basis that the governor general does not really have the right to reject a request from the prime minister to dissolve Parliament.

Though scholars disagree as to whether Byng's decision was the right one, Mendes said the crisis will likely be brought to the attention of Simon and she will basically "learn from that situation," and accept the anticipated request from Trudeau to call an early election.

This report was first published by The Canadian Press on July 28, 2021.