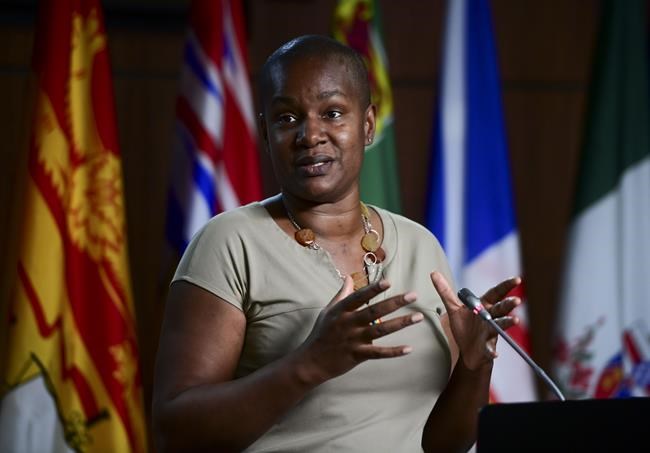 OTTAWA — The Green party is poised to shell out hundreds of thousands of dollars on legal battles with leader Annamie Paul, worsening an already rough financial situation as a federal election nears.

At a meeting of the Greens' federal council Tuesday night, executives of the party said it spent about $100,000 on legal fees in July, with another $100,000 earmarked for legal expenditures in August, according to two party sources not authorized to speak publicly on the matter.

The past month saw Paul start an arbitration related to her employment contract and moves by party brass to oust her through a non-confidence vote and a membership suspension — both were halted by the independent arbitrator.

In response, several senior officials launched a legal challenge on behalf of the party against Paul that questioned the arbitrator's decision, racking up further costs.

The pricey legal proceedings are tilting an already steep cash imbalance, with Douglas Tingey, president of the Green Party of Canada Fund, stating in a report earlier this month that the "current financial situation is not sustainable."

"Most of our legal expenditures relate to the legal proceeding initiated by the leader," he said in an email Wednesday, referring to the arbitration and the court case. A small chunk of it also went toward negotiating Green employees' first collective agreement, Tingey said.

Tingey told council members Tuesday the Greens would have about $300,000 in the bank if an election were called next month, compared to $1.9 million at the outset of the 2019 election and $3 million when the writ dropped in 2015, two sources said.

The relatively small sum does not account for $150,000 in wage subsidies that came into party coffers this week, nor does it take into account a potential campaign loan, he added.

The cash crush comes despite a fundraising bump during Paul's nearly 10-month tenure.

The party raised about $1.36 million in the first two quarters of 2021 compared to about $1.2 million in the same period a year earlier, according to Elections Canada filings.

Spending exceeded revenues since the fund's board of directors was elected in February, according to Tingey's report. Costs outpaced gross income by $105,000 in May and $103,000 in June, for example.

"This is due to financial decisions taken in 2019 and 2020, particularly the decision to retain staffing levels after the 2019 election,'' he wrote.

MP Elizabeth May stepped down as party leader in November 2019 and named Jo-Ann Roberts as her interim successor. Paul won the leadership in October 2020.

Staffing costs make up 70 per cent of the Greens' budget, Tingey has said, with Paul’s compensation part of the costs. As a party employee with no seat in the House of Commons, she does not earn a publicly funded salary.

A motion was tabled at a federal council meeting on June 29 to hold back $250,000 previously earmarked for Paul's campaign in Toronto Centre, as first reported by The Canadian Press based on four party sources.

The move to halt cash flow followed layoffs of about half of the Greens' employees, including all of Paul's office staff.

In February, Lloyd's of London opted not to renew the Green Party of Canada Fund's insurance policy. Tingey said the decision owed to the impact of the COVID-19 pandemic on the firm's underwriting business rather than the party's dire financial straits.

The fund continues to seek a new policy but has yet to find a provider, he said.

This report by The Canadian Press was first published July 28, 2021.