Ontario announces ventilation units for all classrooms without mechanical systems 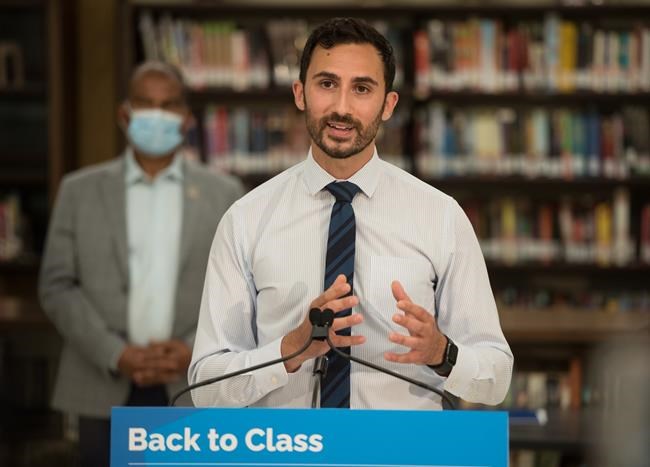 TORONTO — All classrooms in Ontario schools without mechanical ventilation systems will have a standalone HEPA unit upon students' return this fall, the education minister announced a day after his back-to-school plan was unveiled.

Stephen Lecce said schools across the province will have improvements in air quality in order to allow kids to return to in-person learning.

"Our actions to improve air quality in classes will give families peace of mind that we are acting and investing and doing everything humanly possible to make sure our schools open safely as we have done in the past and we keep them open for the benefit of children now and into the future," he said.

Ontario had the longest interruption to in-person classes in Canada.

About 70 per cent of schools in the province have mechanical ventilation and of those, nearly all of them have had their systems assessed or recommissioned to optimize air flow. About 92 per cent are using higher-grade filters and changing them more frequently, as well as running their systems for longer, and 87 per cent have increased their fresh air intake, Lecce said.

In the schools without mechanical ventilation, Lecce said 50,000 standalone HEPA units are already in use, and $25 million in funding announced Wednesday will buy 20,000 more - enough for every classroom.

Lecce said it will also be enough for all other learning spaces, such as gyms, libraries, portables, and child care rooms within schools. Every junior and senior kindergarten classroom will have a HEPA unit, regardless of the school's ventilation system, since those kids will not be required to wear masks, Lecce said.

Schools are also encouraged, as much as possible, to keep windows open to improve air flow or take classes outdoors, he said.

Both the NDP and the Liberals have called for smaller class sizes, which was not included in the back-to-school plan.

Chief medical officer of health Dr. Kieran Moore also announced that he approved a change to the plan as announced Tuesday, permitting high-contact sports - such as hockey and basketball - to be played indoors. The plan previously said those activities could only be done outside.

Moore said he thinks it can be done safely with protocols around screening, testing and hand hygiene in place.

"It's a risk reduction strategy," he said. "There's never a compete risk elimination, but we think it's prudent, we think it's reasonable and we certainly want our children to be able to participate in those sports."

Neither teachers nor eligible students will be required to be vaccinated as part of the back-to-school plan, and Moore said Wednesday that shots won't be required for kids to participate in extracurricular activities.

"I do not anticipate any different approach whether a child is vaccinated or unvaccinated on any activities within the school setting," he said.

"We would not be knowledgeable of their immune status and there should not be any barriers or stigmatization of children who have not received a vaccine in any way."

The back-to-school plan includes the return of extracurricular activities, field trips, assemblies, the use instruments in music class, relaxed rules on the use of shared spaces such as libraries and cafeterias, and a continued requirement for students in Grades 1 and up to wear masks indoors.

Ontario reported 139 new COVID-19 cases on Wednesday, and 11 deaths. The Ministry of Health says that seven of those deaths happened between December and February, and are being added due to a data clean-up. The new cases were based on more than 17,100 tests completed in the past day.

There are 108 people in intensive care due to COVID-related critical illness and 76 patients are on ventilators.

More than 60,094 doses of vaccines were administered over the previous day, for a total of more than 19.6 million.

Provincial data show 99.5 per cent of all COVID-19 ICU admissions from mid-June to mid-July were in unvaccinated or partially vaccinated people, and nearly 96 per cent of related deaths were in the same group.

This report by The Canadian Press was first published Aug. 4, 2021.