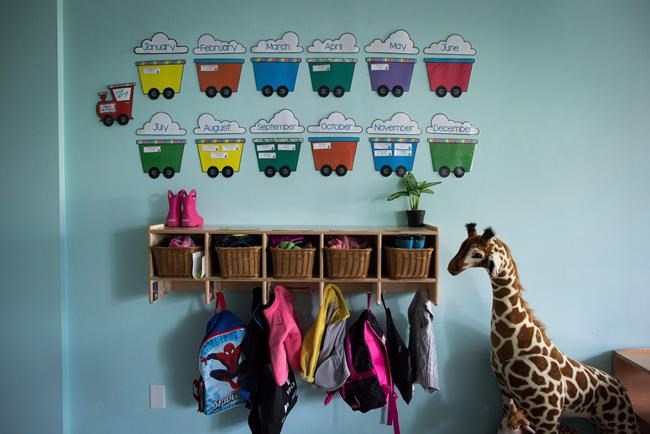 TORONTO — Baa Baa Black Sheep is back in Ontario child-care centres as new provincial COVID-19 guidance for the sector allows the return of singing indoors, eases cleaning rules and lets visitors inside.

The updated guidance follows calls from parents and operators for the government to review some of the rules that were brought in last summer when centres reopened, and brings some rules in line with Ontario's recently announced back-to-school plan.

Singing indoors is now permitted, and visitors are allowed inside, though some child-care operators say they need more clarity on the latter. Many are now waiting for word from their local public health units on how each region will be implementing the new guidance.

Previous guidance said parents should not enter, so centres have been doing drop-offs and pickups at the door, with staff running kids to their rooms — and some are unsure if the new guidance explicitly allows them to stop this.

"They're definitely running around, shouting with each other and playing, so I don't see the difference with singing," she said.

But Adams said she'd be all right with parents continuing to stay outside, especially since she doesn't know if everyone is vaccinated.

"I miss going in there obviously ... My son who started during COVID, I don’t know the teachers at all," she said.

Maureen McLeod, whose son will soon start kindergarten in Toronto, said she too would defer to a centre's comfort level.

"I know as a parent I would love to go in there and see kids play…(but) I’m OK with them still saying no parents in until we’re clear on how this impacts kids with the Delta variant."

Child-care operators said the language around visitors in the new guidance is too vague to act on just yet.

"It doesn't really say that parents can actually drop off their children anywhere," said Amy O'Neil of Treetop Children's Centre. "We're under the understanding that we still have to escort the children from the screening station up to their classroom."

Providers have said that the extra staff needed to take every child in and out of the centres is a huge strain on their budgets, but they want to operate safely and according to the rules.

Alana Powell of the Association of Early Childhood Educators of Ontario said having parents go into child-care centres may not be possible at many places right now.

"The operators I've spoken to have said the current changes … won’t reduce any of their need for screeners and runners, still," she said.

"If local public health units don't change their guidelines to match, then of course operators are going to follow through with whatever guidelines are more stringent."

"By following and implementing expert medical advice, we have kept child care centres safe and open throughout the pandemic," Caitlin Clark said in an email. "Health and safety training, adherence to protocols, practicing hand hygiene, consistent screening, mask use and distancing have been key factors contributing to the safety of children and staff within child care centres."

Under the new guidance, staff could also now move between locations and age groups, though it's still not encouraged, and don't have to wear masks outside or face shields when working with kids in Grade 1 and up who are wearing a mask.

The guidance acknowledges that because the risk of surface transmission of the virus is low, the focus should be on hand washing rather than having to clean a shared toy between each child who uses it, and that group sensory materials are allowed.

Kim Yeaman of Simcoe Child Care Services said she was excited to get the water tables out again.

"Playing alongside each other with those sensory materials is something that’s been missing," she said. "We feel as though having that group sensory is a really vital, vital part of our program."