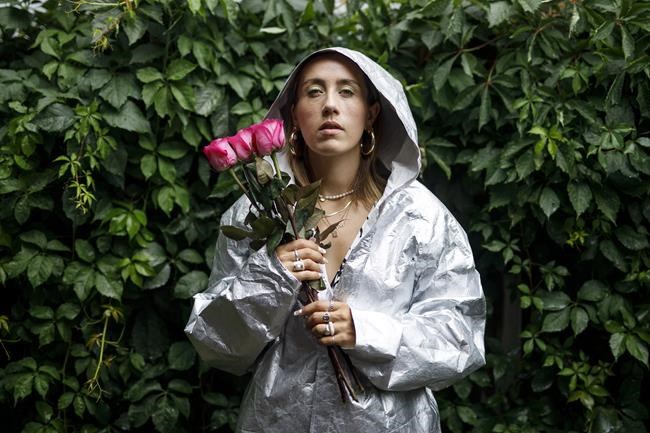 TORONTO — Standing in her backyard on a drizzly summer afternoon, pop singer Ralph is proving to be a tenacious trooper of the Canadian independent music scene.

Rather than bowing out from a photoshoot in the rain, she's slipped into a silver rain jacket and agreed to play along with a visual gag. The idea has her gripping a bouquet of pink roses in a subtle wink to the TikTok fame that blindsided her a little over a month ago.

She had posted a clip on the social media platform recalling the time she unknowingly ingested the scent of a poisonous angel trumpet flower and slipped into a sleep paralysis.

The Toronto singer thought the anecdote would be amusing fodder for Tiktok. She didn't think it would rack up more than half a million views and make her the focus of a Newsweek story on people who inhaled toxic flowers.

"Hopefully this will bring more eyes — the right eyes, the people who want to look me up a little deeper," the artist suggested in an interview about her new EP.

Consider the TikTok viral moment a lesson in how quickly social media can veer out of control, and the savviness it takes for a musician to seize the opportunity.

Over the past few years, the 32-year-old singer born Raffaela Weyman has grown from indie-pop hopeful to an increasingly familiar name in pop who's proving her versatility.

Her 2019 house-inspired dance single "Gravity" earned a Juno nomination for dance recording and became a favourite of the drag community — most notably "RuPaul's Drag Race" contestant Kim Chi who she says played the track on global tour dates.

Last year, Weyman made two appearances as a vocal coach on the first season of Crave's reality competition "Canada's Drag Race," pitched numerous songs for television commercials and more recently laid down a voiceover to promote a small Vancouver vineyard.

Her new song "Feels Like Home" was selected to play over the end credits of "Strays," the spinoff to CBC’s "Kim’s Convenience" set to debut next month.

It's an eclectic batch of gigs, but unlike some Canadian musicians who prefer not to discuss their multistream income, Weyman embraces the reality that's allowed her Ralph persona to exist.

"Music is a fickle gal," she explains, "and I want to make sure that I have my hands in these other honey pots."

These days, her focus is largely on "Gradience," the EP she released last month.

It's a dreamy pop concoction that puts a contemporary spin on a very retro vibe, with an album cover that features Ralph striking a mystical Stevie Nicks-esque pose.

As a package, the six tracks speak to Ralph's upbringing as a student of popular music.

On the wall of her basement workspace, she's framed her three most-cherished concert tickets: one for a 1999 Backstreet Boys show, another for the 2008 Spice Girls reunion and a third for a Fleetwood Mac tour date. Each of those radio-friendly influences can all be heard in some sense on "Gradience."

"Strawberry Meltdown" is set during a heatwave and was imagined as a nod to Harry Style's megahit "Watermelon Sugar," while piano ballad "Rules of Love" cools down as a sombre confessional of the brokenhearted.

Though Weyman doesn't say it directly, she's intent on leaving a lasting impression on the Canadian music scene.

With the recent launch of her own label Rich Man Records, a partnership with her manager Laurie Lee Boutet, she plans to showcase other young Canadian artists, particularly female-identifying performers, people of colour and queer musicians, who she suggests have a harder time breaking into music and thriving in the existing ecosystem.

"We want artists to come into the music industry and feel like they have like a hub of people who are good, respectful and there to support and grow them," she says.

"The music industry is really volatile – and a lot of it is not about talent. It's about luck. I always say this to people who want tips: work your hardest and enjoy it because you could be the most talented human in the world and you won't necessarily get famous for music."

"You have to keep that in the back of your head," she adds. "Make sure you're expanding your craft and protecting yourself."

Even today, Weyman says it's a perspective that drives her to continue collecting those small wins she's made over the past six years. It's easy to forget that as an indie artist, she's already considered a success by many of her peers.

"In Canada, I've carved out a little name for myself," she acknowledges.

"And although sometimes it feels not that way … I do have to remind myself there are a lot of artists who look at me and go, 'Wow, how did you do it?'"