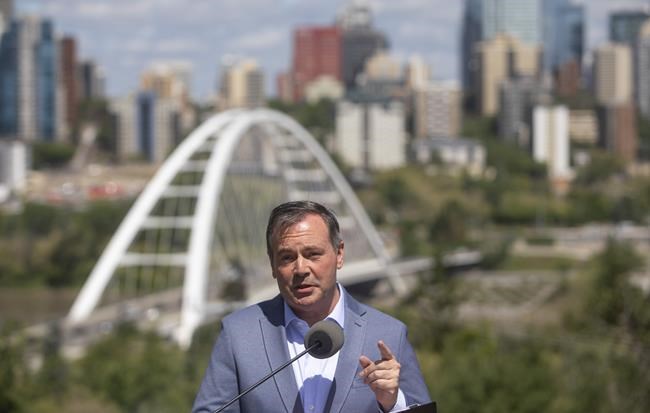 Hajdu earlier penned a letter to her Alberta counterpart saying she agrees with the Canadian Paediatric Society's description of Alberta's move to lift all COVID-19 measures as an "unnecessary and risky gamble."

"We're not going to ... take lectures from Minister Hajdu, particularly when it appears that she and her boss (Prime Minister) Justin Trudeau are hell-bent on a federal election campaign," Kenney said Friday at a news conference in Bowden, Alta., about drought support for farmers.

"If they really are that concerned about COVID, then why is she getting ready to put up campaign signs?"

Kenney went on to describe Hajdu's letter as a political ploy and criticized her handling of COVID-19 in the early days of the pandemic.

He said the federal government should respect the advice of Alberta's top doctor, as his government does.

Hajdu is one of many political leaders and health-care experts across the country who have spoken out about Alberta's decision to eliminate COVID-19 isolation, testing and contact tracing measures.

Dozens of people chanted “test, trace and isolate” outside the legislature in Edmonton on Friday. It was the ninth consecutive day of protests, which have also taken place in Calgary.

Organizers said they will continue to protest every day until Aug. 16 – the day quarantine requirements lift in Alberta for people infected with COVID-19.

David Walsh, 14, said even though he is fully vaccinated, he is concerned for his peers when they return to school in September.

“It’s idiotic, quite frankly,” Walsh said. “I’m worried about asymptomatic people in the school ... and not having to isolate anymore is concerning. I’m worried about my classmates and those who have been fed misinformation and haven’t been vaccinated.”

Businessman Rob Sproule attended the protest with his wife and children. He said he is gravely concerned about a fourth COVID-19 wave.

“No other jurisdiction has gone this far. Dropping restrictions is one thing. You don’t have to take it one step further and treat COVID like it’s the cold. It’s not a cold," said Sproule.

As concerns mount, so are cases in Alberta. Thursday marked the single highest daily case count since July 1 with 397 new infections. Alberta also had the highest active case count in all of Canada, according to federal data.

On Friday, the province reported 369 more cases, and 11 new hospitalizations.

Dr. Craig Jenne, an infectious disease expert at the University of Calgary, said severe outcomes as a result of community transmission is the biggest concern.

"If this trend continues, I think we're going to have to face some tough decisions on how to slow it," said Jenne.

"If, however, we see a stronger disconnect between rising cases in the community and limited hospitalizations, then that's an indication we can continue moving forward."

NDP deputy leader Sarah Hoffman said the government needs to release the data so Albertans can make decisions on their health and gauge the risks.

Hinshaw said the modelling suggests cases will rise for a month but will have a limited impact on the province's acute care system.

Chris Bourdeau, a spokesman for Alberta Health, said in a statement that Hinshaw's decisions are based on "thorough medical analysis, using the best data available from Alberta and around the world."

Bourdeau said Hinshaw will release some data next week, but did not clarify if the internal modelling will be included.

Late Friday afternoon, the province released a 126-page independent report into its response during the first wave of the pandemic.

The review looked into the government's response to acute and continuing care, the economic consequences of the pandemic, messaging on COVID-19, the government's decision-making process and procurement of personal protective equipment.

It made three recommendations, including one for the province to work collaboratively with other stakeholders, such as municipalities.

This report by The Canadian Press was first published Aug. 6, 2021.

— With files from Fakiha Baig in Edmonton