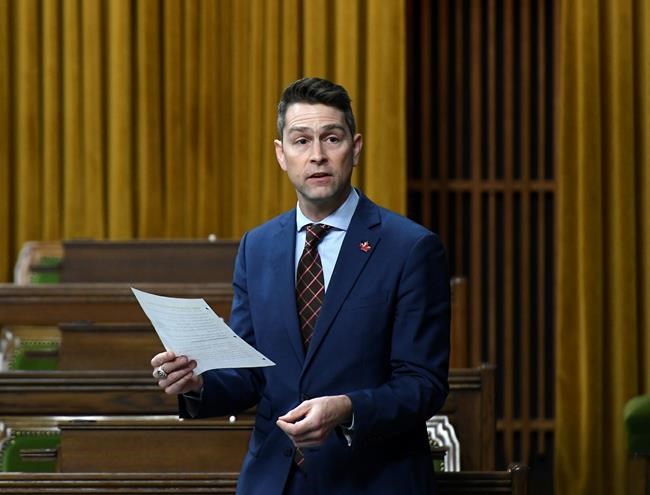 OTTAWA — Liberal MPs Adam Vaughan, Will Amos and Karen McCrimmon won't be running in the next federal election.

That brings to 12 the number of incumbent Liberals who won't be seeking re-election.

But in another sign of an imminent election call, the Liberals are wasting no time filling some of those gaps.

And it announced that Sophie Chatel, a career public servant and tax specialist, will take the place of Amos in Quebec's Pontiac riding.

Naqvi represented the riding in the provincial legislature from 2007-2018.

The party has not yet announced a replacement for Vaughan, whose departure puts the downtown Toronto riding of Spadina-Fort York in play. Vaughan won the newly created riding in a 2014 byelection, handily defeating former NDP MP Olivia Chow, who had previously represented Trinity-Spadina, portions of which were absorbed into the new riding.

Vaughan said Monday he decided not to seek re-election after spending 15 years in politics. He wants to spend more time with his family after turning 60.

He said he made the "tough decision" after reflecting on the work he will have to do to achieve progress on files including the national housing strategy, and he found that he cannot do that at "half speed."

"The job is not just intellectually and spiritually demanding. It's also physically demanding," he said in an interview with The Canadian Press.

"I've been doing announcements for the last week — up at 5 every morning going off to airports and then driving for four or five hours to do a half-hour announcement, to get back in the car to get to the airport to get to the next city."

The intensity of being an MP has taken a toll on him, he said, especially with a political culture where, sometimes, the priority has become shaming people rather than explaining policies.

"We live in an environment of gotcha politics and it's not just … the opposition that plays that game, it's journalists who play that game too, and it's a political culture that you can see on social media," he said.

"It's never about the ideas. It's about the person and that's a little disappointing … Politics is getting more caustic and more vitriolic."

Vaughan was a Toronto city councillor for the Trinity-Spadina area between 2006 and 2014.

Prime Minister Justin Trudeau is widely expected to call an election soon as his cabinet ministers and MPs are criss-crossing the country making campaign-style announcements.

Amos, who has represented Pontiac since 2015, said in a post on Facebook that he will not be running after discussing his options with his family.

"I'm not closing the door to politics and elected public service in the future. But I have concluded that the time is not right for me to launch into another campaign," he said.

"I want to explore other avenues that enable better life/work balance."

Last month, Amos's office said he is pursuing a "wellness program" after twice exposing himself during virtual proceedings in the House of Commons, incidents he described as accidental.

In May, Amos was caught on camera urinating — which was broadcast on an internal parliamentary video feed of Commons proceedings but not seen publicly — after he appeared naked in April during similar virtual proceedings, which he said occurred as he changed clothes after taking a jog.

In a post on her Twitter account, McCrimmon said she will not seek re-election in Kanata-Carleton due to "health challenges" that require her attention, noting that she was not forced to take this step.

"I acknowledge that the timing is undeniably difficult. I am also acutely aware and not insensitive to the fact that this will impact others, but I feel that to delay further would not be in the best interests of the people of Kanata-Carleton."

Conservative candidate Jennifer McAndrew has already started canvassing with her team in a bid to win back the riding, which her party lost to McCrimmon in 2015.