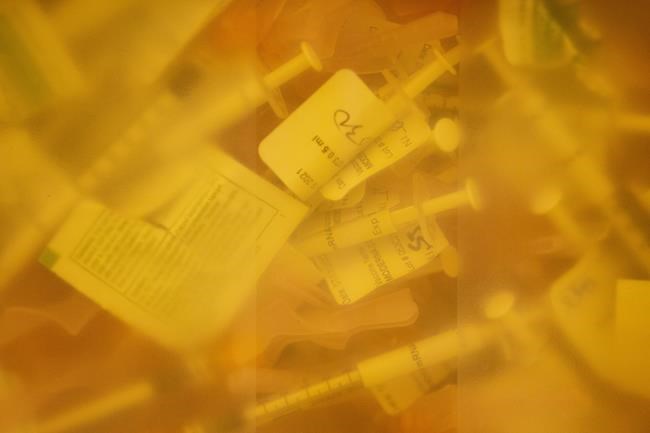 TORONTO — COVID-19 cases appear to be on the rise in Ontario again and business groups are calling for a vaccine certificate system as a means to avoid another lockdown.

Ontario has reported rising positivity rates and more than 300 new COVID-19 cases for the past four days, with more than 400 on Sunday - levels not seen since mid-June.

But while saying he "can't stand lockdowns," he also has not ruled out having to enact another one.

Ryan Mallough, with the Canadian Federation of Independent Business, says his group would support a vaccine certificate system if it's the difference between that and going back into a lockdown, but the government would need to be very clear on what responsibilities are for employers and employees.

Either way, Ontario businesses need to see the plan of what happens in the face of rising cases, and what the thresholds will be, Mallough said. Previously, rising cases meant lockdowns, but he wonders what it means now that the province has relatively good vaccine coverage.

"Everyone is watching those numbers like a hawk," he said. "We’ve been conditioned to do that over the last 17 months…but what does the numbers going up mean now?"

Rocco Rossi, president and CEO of the Ontario Chamber of Commerce, said a vaccine certificate system would be a way to avoid another lockdown and accelerate an economic reopening.

He took issue with the premier leaving open the possibility for another lockdown while at the same time nixing a vaccine certificate over concerns about individual rights.

"Our point is simply that you can't have your cake and eat it too," Rossi said.

"If you accept through the use of lockdown that society retains the right to limit individual rights, then we should be looking for practical tools that are the lesser of two evils and all of us can agree that the greater danger to individual rights is a society-wide lockdown, which none of us wants to see return."

A request for comment from the premier's office about vaccine certificates was met with a reply from a spokeswoman for Health Minister Christine Elliott.

"We have been clear that the government will not make vaccines mandatory within Ontario," Alexandra Hilkene wrote. "Certain settings and/or businesses may require proof of vaccination which is why everyone receives a COVID-19 vaccination receipt after their first and second dose."

The Canadian Chamber of Commerce and Toronto Region Board of Trade have also spoken in favour of vaccine certificates as a way to avoid lockdowns. Health groups such as the Ontario Medical Association and the Registered Nurses' Association of Ontario have called for their use as well.

The province's science table advisory group said certificates would allow high-risk settings to reopen sooner with greater capacity and help plan for future waves of the virus. However, it also noted there's no evidence linking the impact of vaccine certificates to vaccine coverage or virus transmission.

Quebec announced Thursday that it would introduce a vaccine certificate system, and the health minister said 11,519 people booked a first dose appointment that day - double the number of previous days.

"I think his issue is that it's a relatively small number of people who are really skeptical about the vaccines or are really opposed to the idea of a vaccine passport," he said.

"But that’s still an important part of his base. He's looking at trying to win 35 per cent of the electorate, there are maybe 10 or 15 per cent  (who) feel really strongly about those things, and I don't think he feels that he can, you know, risk their support."

There were 113 patients in intensive care with COVID-related critical illness and 70 people on ventilators.