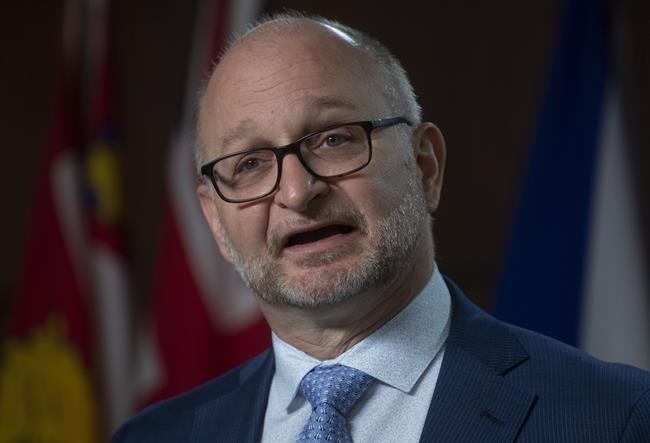 OTTAWA — The federal government is committing $321 million in new funding for programs to help Indigenous communities search burial sites at former residential schools and to support survivors and their communities.

Justice Minister David Lametti says he will appoint a special interlocutor to work with Indigenous communities and the government to propose changes to federal laws, policies and practices that are related to unmarked graves at residential schools.

Speaking to a virtual news conference today, he says Canada currently does not have the necessary legal tools needed to deal with the complex issues presented by the findings of unmarked graves.

Crown-Indigenous Relations Minister Carolyn Bennett says $83 million will be added to an existing $27-million program to fund searches of burial sites and commemorate the children who died at residential schools.

She says the government will create a national advisory committee, made up of archeology, forensic, pathology, and mental health experts, to advise Indigenous communities and the government about work to find and identify the children.

He says the government will provide $100 million over two years to help Indigenous communities manage residential school buildings, whether those plans include demolition, rehabilitation or the construction of new facilities.

Heritage Minister Steven Guilbeault says the government is setting aside $20 million to build a national monument in Ottawa that honours the survivors and all the children who were lost.

He says the new monument will be a commemorative space where Indigenous and non-Indigenous peoples can gather to "express their collective grief and find a way forward to heal together."

Several Indigenous communities have announced since spring that hundreds of unmarked graves have been located at the sites of former residential schools.

In June, the Lower Kootenay Band in British Columbia said a search using ground-penetrating radar had found what are believed to be 182 human remains at a site close to a former residential school in Cranbrook.

Cowessess First Nation earlier said that ground-penetrating radar detected 751 unmarked graves at the former Marieval Indian Residential School east of Regina, Sask., a few weeks after the finding of what are believed to be the remains of 215 children in Kamloops, B.C.

The Squamish Nation in the Vancouver area was set to make an announcement on Tuesday about the former St. Paul's Indian Residential School.

Prime Minister Justin Trudeau is widely expected to call an election soon and his government's record on Indigenous reconciliation is set to be a major issue.

Late last month, NDP Leader Jagmeet Singh met with Indigenous leaders at the site of the former Kamloops Indian School and demanded that Trudeau to make good on his six-year-old promise to fulfil all 94 calls to action of the Truth and Reconciliation Commission.