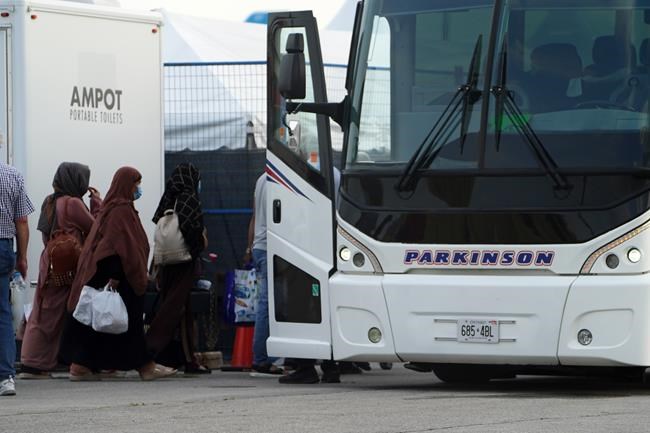 OTTAWA — Canada will accelerate processing the families of interpreters and others who supported its mission in Afghanistan to quickly evacuate as many approved people as possible, Immigration Minister Marco Mendicino said Friday.

Mendicino made the remarks as Defence Minister Harjit Sajjan confirmed that the first Canadian plane full of Afghan refugees took 188 people out of the Kabul airport Thursday night.

In an interview with The Canadian Press, Mendicino said his department is ramping up processing Afghan refugees by adding resources to the operation.

He said the government is not requiring passports or COVID-19 negative tests from the Afghan passengers and is deferring biometric screening to a third country, where it's safe for evacuees and government officials to be screened.

"We have now two of our largest air carriers running back and forth from Kabul. We're going to keep those flights going for as long as possible," he said.

Mendicino said the main obstacle remains the Taliban checkpoints that Afghans have to go through to reach the Kabul airport.

"It's our expectation that every Afghan that is eligible under our program be permitted safe passage to get to the airport," he said.

The Department of National Defence announced this week that two C-17 transport aircraft had been deployed to conduct regular flights out of Kabul.

Defence Department spokeswoman Jessica Lamirande said in an email Thursday that the C-17s have been reconfigured to maximize the number of passengers they can carry and have begun to fly in and out of Kabul.

In a tweet, Sajjan said Thursday's flight took out 175 Afghans and 13 foreign nationals.

"Canadian flights will continue for as long as the situation on the ground permits," he wrote.

"We have been working closely with our allies, particularly with the U.S. and the U.K. on ensuring that we are as effective as possible, all together, bringing out as many Afghans as possible and getting people to safety," Liberal Leader Justin Trudeau said at a campaign stop in Winnipeg.

He said several more round-trip flights from Kabul were to follow Friday.

Lamirande said Afghans evacuated Thursday have been accepted under the immigration programs of other nations and will be transferred to their care. Other participating nations are carrying Canadian citizens and Afghan nationals destined for Canada.

An interpreter currently waiting in Kabul to be evacuated to Canada with his wife and three children said the Taliban militants knocked on his door Friday morning asking what he does for a living and why he is not in his home province.

The interpreter that The Canadian Press is not naming to protect his safety said he had to lie to the militants by telling them he worked at a bakery shop and he is in Kabul for work.

"They were searching every house where I live," said the interpreter who previously worked with the Canadian Armed Forces in Kandahar.

He said he submitted his application for resettlement in Canada last month and he and his wife visited the Canadian Embassy in Kabul on Aug. 5, before the Taliban took control of the Afghan capital.

He said he has not heard from the Canadian government since then.

"It is very dangerous to be in Kabul," he said. "Things are getting worse hour by hour."

He said he can make his way to the Kabul airport but he is not sure he will be able to get inside with his family because of the large crowd of people waiting outside.

"It's a very difficult situation outside,” he said. “I have seen some videos from outside the gate … and they are shooting in the air just to scare the people."

Canada is trying to evacuate Afghans including former interpreters and support staff as well as their families, who are now at risk of Taliban arrest or worse for having worked with the Canadian military and other organizations.

Veterans and advocates have complained for weeks about the government's handling of the crisis. Their concerns include complicated forms for Afghans to fill out, unrealistic and confusing application requirements and complete silence from the department after paperwork has been submitted.

This report by The Canadian Press was first published Aug. 20, 2021.

Note to readers: This is a corrected story. A previous version said a plane full of Afghan refugees landed in Canada on Thursday night.