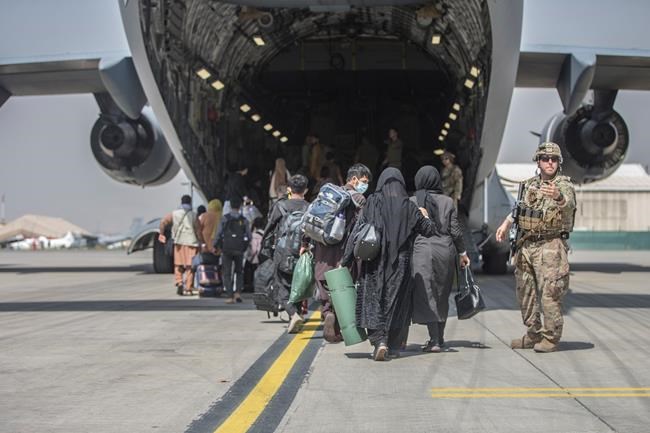 OTTAWA — The Canadian military will begin wrapping up its mission at Kabul airport ahead of the Aug. 31 deadline the United States set for ending the mission, Defence Minister Harjit Sajjan said Wednesday.

Sajjan said that's because the U.S. is leading the mission and providing security and so its forces, some 6,000 personnel, must be the last to leave the airport. That means Canada's special forces and aircrews must begin departure preparations in advance.

Canada is using two C-17 transport planes to airlift Afghans to safety, and is one of 13 countries taking part in the airlift. It also has special forces operatives on the ground who are working outside the airport's confines to spirit fleeing Afghans to waiting flights.

"Drawing down a mission takes a considerable amount of time. It is not done overnight and it comes with considerable risk," Sajjan said, but he declined to give specific details.

"We remain dedicated to evacuating as many people as we can in the limited time we have left."

The pace of Canada's evacuation efforts has ramped up noticeably in the past three days with a flight on Monday carrying 506 people, about half of which were children and a record 535 on a flight out on Tuesday.

Sajjan was one of four ministers briefing journalists on the ongoing crisis in Afghanistan as the frantic effort continues to fully evacuate all foreign nationals and vulnerable Afghans who helped Canada, the U.S. and their NATO allies before the country's recent fall to the Taliban.

Immigration Minister Marco Mendicino said Canada's commitment to helping Afghans will go on after the military withdrawal from abroad.

Prime Minister Justin Trudeau and his fellow G7 leaders were not able to persuade President Joe Biden to extend the American deadline for withdrawal at their virtual summit on Tuesday.

Garneau said Canada and the G7 will be laying down markers for the Taliban in talks that will take place over the coming days to impress upon the regime that it must not block Afghans from leaving the country.

"We are working together to develop the necessary approach that we will take towards this Taliban regime in the coming days and to put down in front of them very important markers with respect to how they have to treat Afghans who want to leave the country," Garneau explained.

"There will be discussions with the Taliban; they are the regime that is in place in the country. And all of this will unfold in the coming days."

This report by The Canadian Press was first published Aug. 25, 2021