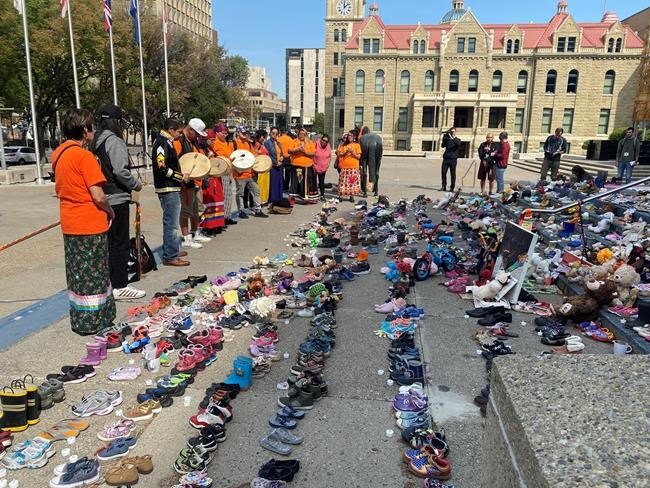 CALGARY — Plans are underway to create a permanent memorial for victims of Canada's residential schools to replace a fire-damaged one that includes hundreds of children's shoes on the steps of Calgary City Hall.

The temporary memorial, which also has stuffed animals and a child's bicycle, was blessed by Indigenous elders in a pipe ceremony Thursday.

The city and Calgary's Indigenous and Métis communities have committed to work toward building a permanent marker to remember the children who died in the schools.

The site has been the target of recent vandalism. Ashes can be seen in one area where someone tried to burn a teddy bear and some shoes.

The items are to remain untouched for now, even with cooler, wetter weather and the approach of winter.

"Well, nothing lasts forever. It's part of Indigenous philosophy that everything's to return to the earth," said Harold Horsefall, an Indigenous issues strategist with the city.

"It's just important we get it right and do it once ... the memorial is an important reminder of the dark truth of what took place at Indian residential schools in Canada."

Several First Nations have reported what are believed to be unmarked graves at or near former residential school sites in Canada.

Mayor Naheed Nenshi was at the ceremony Thursday, along with city councillors, elders, drummers and Indigenous residents.

"We are bringing the energy to the place where we can all move forward" said elder Leonard Bastien.

Horsefall said there is no time stamp on when the memorial will be built, but it is to be done after extensive consultation with the Indigenous community.

He said the vandalism may have helped move the process along.

"Nobody wants to see a memorial vandalized and so it does help provide some impetus," he said.

The Calgary Bear Clan Patrol, a street patrol group, also held a ceremony to remember children at the schools. Member Yvonne Henderson said the group supports the work for a memorial.

The group, along with elders and school survivors, also wants to see the original shoe memorial stay in some form to serve as a constant reminder.

"It is very concerning for us with the recent vandalism at the memorial. It was triggering and a reminder of the underlying racism that Indigenous people still experience," Henderson said.

This report by The Canadian Press was first published Aug. 26, 2021.