Canada, allies watchful of how China will fill Western void in Afghanistan 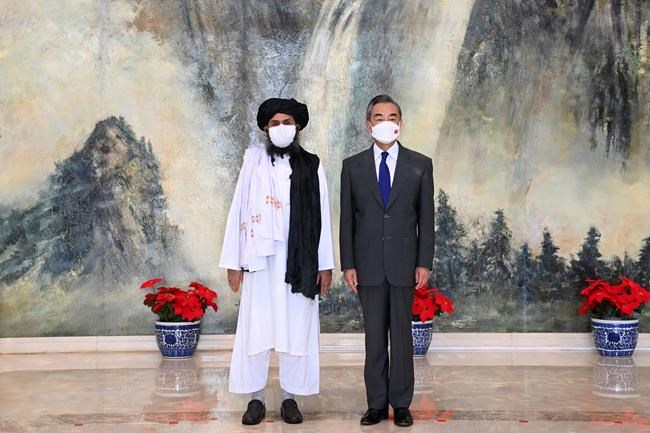 OTTAWA — With the United States and its allies, Canada included, having left Afghanistan firmly in the hands of the Taliban, another world power is stepping into the void to exert its influence on the troubled country — China.

Analysts predict that could transform the recent political foe into an unexpected Western ally on a shared priority: fighting terrorist groups within Afghanistan and preventing them from threatening neighbouring countries.

That's because Afghanistan and China share a small piece of land border that abuts the Chinese province of Xinjiang where Beijing has detained hundreds of thousands of ethnic Muslim Uyghurs.

Canada and dozens of countries have denounced China at the United Nations for what it sees as the systematic abuse of the Uyghurs. Human rights advocates, political figures and scholars gathered last week in Britain for a major conference to discuss what they allege is a genocide being perpetrated by Beijing.

China denies the allegations and has vigorously defended its actions in Xinjiang, saying it is trying to stamp out domestic terrorism through re-education efforts.

China does not want to see any infiltration of the Islamic State group's Afghanistan affiliate known as ISIS-K, which staged a suicide attack on Kabul airport late last month killing 13 American military personnel and dozens of Afghans.

Cong Peiwu, China's ambassador to Canada, said his country wants Afghanistan to be on good terms with the international community, especially its neighbours.

"China sincerely hopes all parties of Afghanistan can echo the eager aspirations of the Afghan people, and the common expectation of the international community: build an open and inclusive political structure, adopt moderate and prudent domestic and foreign policies, make a clear break with terrorist organizations in all forms," Cong said in an interview.

Relations between China and the U.S. are at an all-time low for a number of reasons. China's aggressive military provocations and claims to the vast waters of the South China Sea have angered regional neighbours and Washington.

Beijing's clampdowns on Hong Kong and ethnic Muslim Uyghurs have also exposed the Chinese government to widespread international condemnation, including from Canada, that it is violating the human rights of a vulnerable group.

"The number 1 priority is avoiding the spillover of terrorist groups into China, their connection through Xinjiang," said Paul Evans, a China expert at the University of British Columbia.

"We've had something of a common agenda with China since 9/11, but in practical terms, it was not too far developed."

The al-Qaida terrorist group used Afghanistan to stage the Sept. 11, 2001 attacks on the United States, but was routed along with the then Taliban government by U.S.-led forces.

Canada joined with its American-led NATO allies to fight a resurgent al-Qaida based in Kandahar in 2006, and fully withdrew its military from the country in 2014. There were 158 Canadian military personnel and seven civilians who died in Afghanistan.

"When I was serving in Afghanistan, China certainly had an interest and it wasn't in any kind of antagonistic manner," said Ben Rowswell, the top Canadian political representative to Kandahar just over a decade ago.

China's main interest in Afghanistan back then was primarily economic, which included an interest in a copper mine. "They were relatively content to have someone else provide the security backstop for the Afghan state," he said.

Today, Rowswell said, China has "massively exaggerated the threat of political Islam within its borders" and it doesn't need to be worried about an infiltration of terrorists from Afghanistan.

"I would expect there to be difficult times ahead for the Uyghurs as the Chinese crack down even further out of fear, out of perceptions there may be some kind of threat," said Rowswell, now the president of the Canadian International Council think-tank.

Bessma Momani, an international affairs specialist at the University of Waterloo, said the fact the Taliban sent its second-in-command to Beijing for a meeting in late July sends a clear signal that it wants amicable relations with China.

"The Taliban have actually made it very clear that they don't have any interest in picking a fight with China or to provide sympathy to the Uyghurs in some way," she said.

But with no diplomatic footprint on the ground, it will be hard for Canada to monitor the effectiveness of its three-year, $270 million foreign aid spending commitment to international organizations operating inside Afghanistan, said Momani.

"For us, the big question is: will we continue to have a foreign aid program there?"

Momani and other analysts are also dismissive of a growing school of thought that China is interested in pursuing new economic interests in Afghanistan, whether it is their old copper mine or attempting to exploit the country's rare-earth mineral potential.

"When you look at it, China plays a pretty conservative game. They want to get a return on their investment," said Ian Johnson, a Montreal native who is the senior fellow on China studies at the U.S. Council on Foreign Relations.

"Yes, there are natural resources. But it's hard getting them out of the ground and getting them to China, as other countries have experienced in the past."

This report by The Canadian Press was first published Sept. 5, 2021.