Kovrig, Spavor supporters march in support of freeing the prisoners, as China objects 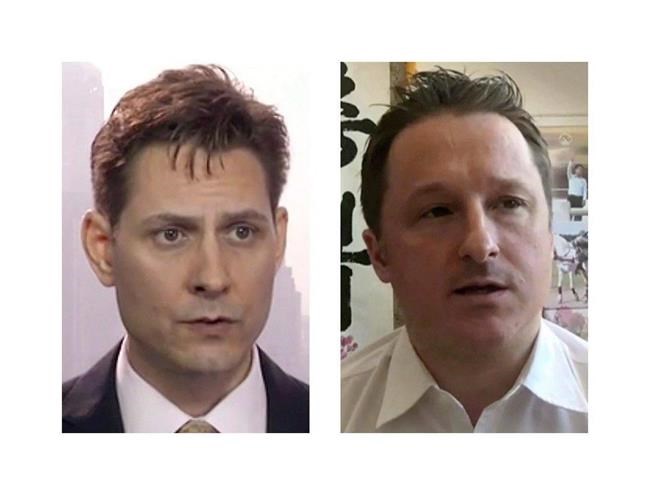 OTTAWA — As Michael Kovrig and Michael Spavor mark 1,000 days in separate Chinese prisons, their supporters took to the streets of Ottawa and beyond on Sunday to push for their freedom.

Around 150 people gathered in the capital to walk roughly an-hour-and-a-half to a park near Parliament Hill. It was intended replicate the 7,000 steps Kovrig has tried to walk every day in his cramped jail cell to maintain his physical and mental well-being, along with a strict regime of reading and meditation.

"One thousand days is a long time and it wears on us, particularly our father," said Paul Spavor, brother to Michael Spavor, who was among the family members of the two men who led Sunday's march, holding a red banner with "#bringthemhome" emblazoned in white.

"We felt it important to mark this day, and Michael has come to understand the global profile of the whole situation, so he's become a little more willing to have us speak."

China's ambassador to Canada said the marchers and others are harming relations between the two countries by hyping the milestone with unwarranted accusations against his government.

That left the political stalemate between Canada and China unbroken ahead of Sunday's marches, which were expected to take place throughout Canada and around the world and are shaping up to be the largest public outpourings of support for the men who have come to be known in Canada and abroad as "the two Michaels."

Kovrig, a Canadian diplomat on leave to an international organization, and Spavor, an entrepreneur who tried to forge ties to North Korea, were arrested in apparent retaliation for the RCMP's arrest of Chinese high-tech executive Meng Wanzhou on Dec. 1, 2018 as she was transiting through Vancouver airport.

The Mounties were acting on an American extradition request because the U.S. wants to prosecute Meng, the chief financial officer of Huawei Technologies, for violating U.S. sanctions on Iran.

Nine days after Meng was detained, Kovrig and Spavor were arrested in China. Both have since been convicted of spying in closed Chinese courts — a process that Canada and dozens of allies say amounts to arbitrary detention on bogus charges in a closed system of justice with no accountability.

China has denied that and accused Canada of being a U.S. government lapdog, and has repeatedly demanded Meng's immediate release. China says the U.S. is simply trying to prevent Huawei from asserting its dominance in the international telecommunications market.

Kovrig and Spavor have languished in prison, while Meng's extradition hearing in the British Columbia Supreme Court has been unfolding at epic length, fuelled by the legal duelling between a large team of Meng's lawyers and Canadian federal Justice Department counsel acting on behalf of the U.S.

The extradition hearing ended in August, and Associate Chief Justice Heather Holmes is expected to render her decision sometime this fall, but it could be appealed, prolonging the imprisonment of the two Michaels.

The men's relatives and supporters are pushing for some sort of political resolution that could bring them home. And they are taking to the streets to make their point.

"It's an extremely difficult milestone, but one that we want to mark in this way, in part, to honour the strength and resilience that Michael and Michael Spavor have shown," Kovrig's wife Vina Nadjibulla said in an interview.

"In one of his letters, Michael had said that we don't choose our circumstances. But we do have a choice in how we handle ourselves in those circumstances. And for 1,000 days, Michael has endured this injustice and his detention with remarkable strength, dignity, and character."

Among those who joined in Sunday's march were the ambassadors to Germany, the European Union, Australia, as well as Conservative foreign affairs critic Michael Chong and Marc Garneau, a Liberal candidate and Canada's foreign affairs minister.

Garneau wouldn't offer specifics of how Canada is trying to free both men, but said the country continues to send the message they are being arbitrarily detained and should be released, and that it will keep working with the United States on the matter.

"The point is that whole process that has been going on for the last 1,000 days is actually moving in a positive direction," he said.

"We talk to all the people that we are dealing with and so I wouldn't say it otherwise. We are making progress, and we will continue to work until we get them free."

Spavor and Kovrig are not allowed visits from family or lawyers, except in the case of their separate trials earlier this summer at which both were convicted. Spavor was later handed an 11-year sentence, while Kovrig is still waiting. Canadian diplomats see the men roughly once a month in a video link; in-person visits ended in early 2020 and were suspended for 10 months because Chinese officials said they wanted to control the spread of COVID-19 in prisons.

Kovrig was a Canadian diplomat who took a leave of absence to work for the International Crisis Group, a non-government agency. In addition to the Ottawa march, Canadian diplomats are expected to walk in solidarity in New York, Washington, Brussels and across Asia, Africa and Latin America.

Spavor's family has kept a low public profile, preferring written statements to public interviews, while Nadjibulla went public last summer with her concerns and stepped up her public advocacy to push the Canadian and American governments to find a way to end the ongoing imprisonment of the two Michaels.

Cong Peiwu, China's ambassador to Canada, said in an interview the marking of the 1,000 days has "gravely violated the norms governing international relations and international law" and noted that Meng has been under arrest in Canada even longer.

"Recently, we have noted that a small number of people here in Canada have been hyping the so-called 1,000 days of the detention of the two Michaels, who are Canadian citizens, making unwarranted accusations against China's handling of the cases."

Cong said his government stands by a report this week from the Global Times, a newspaper controlled by the Chinese Communist Party, saying that Spavor photographed military equipment and shared the images outside the country. The report, citing unnamed sources, said Spavor shared information with Kovrig over a long period of time.

Nadjibulla reiterated her long-held view that neither Kovrig nor Spavor are spies, saying the allegation that leaked out this week has been publicized in the past. Spavor's family and friends have said in written statements that he was doing nothing untoward in China and has been committed to building bridges with North Korea.

Nadjibulla said the next few weeks and months will be critical towards breaking the logjam. In addition to Holmes's ruling, there will be chances for U.S. President Joe Biden and Prime Minister Justin Trudeau to meet Chinese President Xi Jinping during the fall gatherings of the G20 and the United Nations Climate Change Conference.

She said the current federal election hasn't really had any effect on the fate of the two Michaels.

"This is not a partisan issue. I have been heartened by that," she said. "Canadians of all political persuasions, and all political leaders are united in the way they see this as an unjust, arbitrary detention and also in their call to bring them home."

The U.S. State Department threw its backing behind Kovrig and Spavor Sunday, with Secretary of State Antony Blinken once again calling for their release.

"The practice of arbitrarily detaining individuals to exercise leverage over foreign governments is completely unacceptable," Blinken said in a statement. "People should never be used as bargaining chips."

This report by The Canadian Press was first published Sept. 5, 2021.

-With files from Stephanie Taylor.