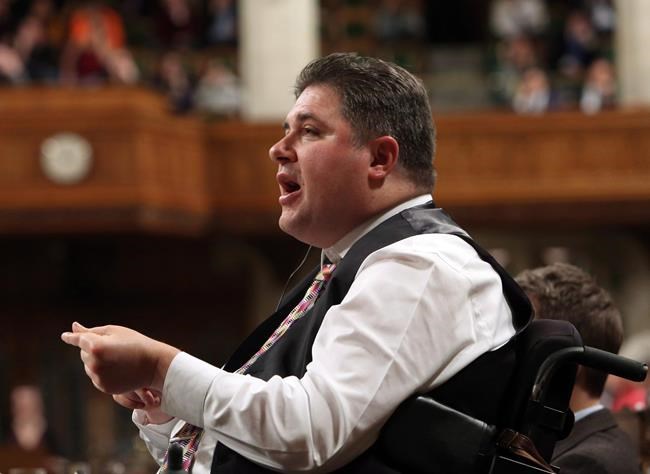 CALGARY — Former member of Parliament Kent Hehr is throwing his hat in the ring to become Calgary's new mayor.

Hehr has become the 28th candidate seeking to replace longtime Mayor Naheed Nenshi, who announced earlier this year he did not want to seek re-election.

Hehr served two terms as a legislature member for the Liberals in 2015. He then successfully ran for the federal Liberals in the riding of Calgary Centre before he was defeated in 2019.

On Tuesday, Hehr said that if elected mayor on Oct. 28, he will work to maintain a positive relationship with both the United Conservative Party government of Premier Jason Kenney and with the federal government in Ottawa.

Hehr said it's essential to "get off on the right foot" with both levels of government to represent Calgary properly.

"You have to take that objective lens and you have to work with people and that's what I've done each and every day," Hehr said outside his Calgary law firm.

"People know me as almost non-partisan Kent. And that's what I'm actually excited about. Going back to city hall, you don't have labels. You just work on good public policy."

Hehr also entered the mayoralty race in 2010 but withdrew to support Nenshi.

Among the other 27 candidates are city councillors Jeromy Farkas, Jeff Davison and Jyoti Gondek.

Hehr said he was encouraged by voters to seek the mayor's chair.

"They told me that they didn't see a progressive in the race ... someone who had the experience I did — eight years at the provincial legislature, four in Ottawa — knowing how those different levels of government work and ensuring that we can partner with them," he said.

In 2018, Hehr left Prime Minister Justin Trudeau's cabinet over allegations that he made sexually inappropriate comments to one woman and touched another inappropriately.

He said at the time that he had no memory of the events, and an investigation deemed any sexual contact incidental.

"Distance and time has put perspective on that issue that allows me to move forward on this campaign and to ensure that we are creating a city that is safe for everyone," Hehr said.

"I think what people should do is look at the record below my name and decide for themselves."