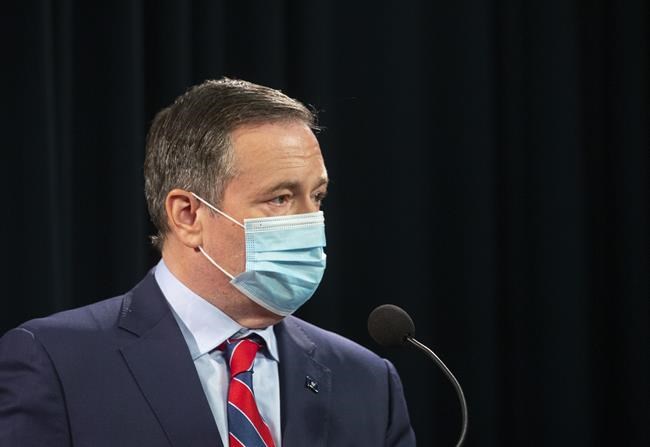 EDMONTON — Twelve Alberta mayors are calling for Premier Jason Kenney to bring in provincewide COVID-19 vaccine passport rules, while a member of his United Conservative caucus is telling him to back away from them entirely.

The mayors in Edmonton and surrounding communities, in a public letter sent Tuesday, urged the government to bring in the passport.

They call it the best way to compel more people to get vaccinated, end the pandemic and fully reopen the economy.

“I think the general public is very, very, almost overwhelmingly in favour of a (vaccine) passport,” Edmonton Mayor Don Iveson, one of the signatories to the letter, told reporters Tuesday.

“I think that a passport mechanism provides a much more strong and relevant incentive … than $100 payments to people who have held out so far.”

Ontario, B.C., Quebec, and Manitoba are implementing such passports, allowing only vaccinated people to access non-essential services such as bars, restaurants and sporting events.

Kenney has said Alberta won’t bring in provincewide rules but noted that some businesses along with Alberta’s national hockey and football teams are mandating vaccinations already.

The mayors were responding to new measures announced by Kenney Friday to curb a resurgence of nation-leading COVID-19 cases and hospitalizations that are now threatening to overwhelm the health system. Patients are being transferred and non-elective surgeries are being cancelled across the province to deal with the influx that filled intensive care to 95 per cent capacity late last week.

“AHS continues to do all it can to ensure we have enough ICU capacity to meet patient demand, including opening additional spaces and redeploying staff,” AHS spokesman Kerry Williamson said in a statement.

Alberta averaged more than 1,200 new COVID cases a day over the Labour Day long weekend. The province reported Tuesday 602 people in hospital with the illness, 137 of whom were intensive care.

On Friday, Kenney announced $100 will now be given to anyone who gets their first or second COVID vaccine from now until mid-October.

AHS said 5,268 people got the jab over the weekend, not including those who may have done so at pharmacies. That is a 13-per-cent bump compared with the previous weekend.

Kenney also reintroduced the provincewide mask mandate for indoor public spaces and workplaces but with multiple exceptions, including gyms and churches.

School boards are also being left to decide their own plans on masking, resulting in a patchwork of rules across the province as students return to class this week.

There is also a 10 p.m. cutoff for alcohol sales at places like restaurants and bars.

The mayors called for better leadership from Kenney’s government, and consistency in the rules.

Kenney has said he has privacy concerns with a vaccine passport, but acknowledges it is valid in some areas. All Alberta health staff, for example, including doctors and nurses, will soon have to show proof of vaccination.

The province is also developing a machine-readable QR code that can be downloaded or placed on a smartphone to make it easy to prove vaccination status.

But UCP caucus member Peter Guthrie is publicly calling out the QR code plan, warning it could be the first step to a provincewide passport that would be unfair to those who choose not to get vaccinated.

“Such a move suggests that the government’s position on this (passport) practice is shifting,” Guthrie wrote in a public letter to his Airdrie-Cochrane constituents Tuesday.

Guthrie also called out Kenney for blaming the current crisis on the 20 per cent of eligible Albertans, those 12 and over, who have not received at least one dose of the vaccine.

“This type of communication from our leader feeds a narrative of anger and division which is unproductive in an already turbulent time,” wrote Guthrie, adding “The $100 vaccine incentive has also created animosity within the constituency.”

The Opposition NDP renewed its call for a vaccine passport. It held a news conference with two club owners who are now facing further disruption and loss of business due to the 10 p.m. alcohol curfew.

“The rug got pulled out from underneath us at a time when we were just finding our footing again,” said Rob Browatzke with Evolution Wonderlounge in Edmonton.

"This weekend we saw a 60 per cent drop in revenue. With that math, at a time when federal subsidies are ending and further provincial support is not coming, we will be closed by Halloween."