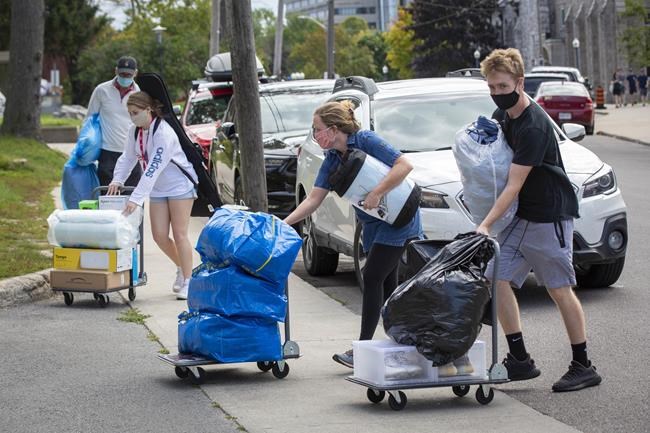 As Ontario college and university students head to campus during a fourth wave of COVID-19, their schools, public health units, cities and police services are grappling with how to keep massive parties at bay.

In-person classes are resuming this year at campuses across the province, and videos and pictures posted to social media show large and raucous street parties.

Bylaw officers in Kingston were at several parties over the long Labour Day weekend with crowds they estimated at between 3,500 to 5,000 people. In addition to the usual public intoxication, open liquor and noise complaint charges and fines, 11 people were issued court summons for violating Ontario's gathering restrictions.

In Step 3 of the provinces reopening plan, gatherings of up to 100 people outside and 25 people inside are allowed.

Kingston's police chief said there is a concerning trend of unlawful, high-risk gatherings.

"Such disrespect for the rights of others is unconscionable," Chief Antje McNeely said. "Besides putting everyone in our community at risk with the COVID virus still very much a concern, the invasion of our streets and parks by irresponsible revellers shows a disappointing lack of maturity."

Queen's University's principal and Alma Mater Society president issued a joint admonishment to students about the large gatherings that have been happening around the campus.

"This is a flagrant disregard for public health and for the law of our province," they wrote, saying such gatherings could jeopardize the academic year.

"We have come so far and it would be a travesty if we could not get back to what we have all been waiting for so very long. Universities are for learning."

Western University is also warning its students that large gatherings could put the entire year in jeopardy.

"We want to be clear: if this activity continues, the academic year we have so carefully planned will not happen," the university's president and head of the student council wrote in a joint statement.

"In-person learning with fellow students, interaction with professors, extra-curricular activities, athletics and all the things that make your student experience great will be lost."

The Middlesex-London Health Unit said it is working with local operators and facilities "frequented by post-secondary students" to ensure compliance with capacity limits.

Police in London have launched Project LEARN - standing for Liquor Enforcement and Reduction of Noise - which they have done since 2007 in response to community concerns that arise when students return en masse to the city. This year, they say it's also important to strike a balance between having a good time and following public health guidelines during the fourth wave of COVID-19.

The president of Wilfrid Laurier University also issued a plea to students who participated in gatherings that were "in flagrant violation of Ontario's public health measures."

Police and Laurier's special constable service are going through video footage and anyone identified could face suspension or expulsion from the university, as well as fines under the Reopening Ontario Act and criminal charges related to some vandalism, said Deborah MacLatchy.

"We are still in the midst of a global health crisis," she wrote.

"Reckless behaviour will not be tolerated as it is putting the most vulnerable in our community at risk and tarnishing the reputation of students and our university."

Ontario reported 554 new cases of COVID-19 Wednesday, and 16 more deaths - though five of those deaths occurred more than two months ago.

Health Minister Christine Elliott said of those new cases, 418 are either in people not fully vaccinated or their vaccination status isn't known.

There are 194 people in intensive care units due to COVID-related critical illness, and eight are fully vaccinated, seven are partially vaccinated, 113 are unvaccinated, and the rest have an unknown vaccine status.

There are 115 people on ventilators in the province due to COVID-related critical illness.

Elliott said nearly 84 per cent of Ontarians have received at least one dose of a COVID-19 vaccine and nearly 77.4 per cent have both doses.

More than 38,000 doses were administered in the previous day.

This report by The Canadian Press was first published Sept. 8, 2021.