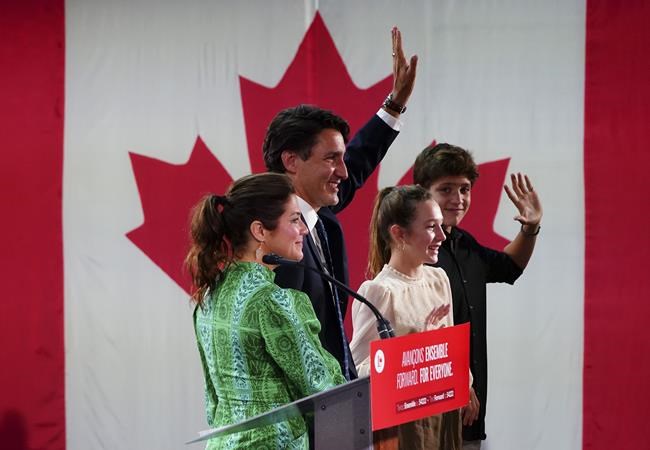 While final results in some ridings might not be known for days, Monday’s election saw the Liberals headed by Justin Trudeau re-elected with another minority government, the Conservatives under Leader Erin O’Toole continuing as official Opposition, and the Bloc Québécois and NDP holding the balance of power.

It was a political landscape virtually unchanged from mid-August, when Trudeau pulled the plug only two years into his minority mandate and sent Canadians to the polls in the hopes of riding a post-vaccine campaign high to secure a majority.

Yet that status quo in the House of Commons is unlikely to extend to the majority of leaders involved in this campaign, with a number facing new challenges to their leadership over their respective failures to dramatically improve their party’s fortunes.

Trudeau was the first to appear in public on Tuesday, making his traditional postelection day appearance at a Montreal metro station to greet voters on their morning commute. Some commuters congratulated the prime minister, others posed for selfies, and one woman threw her arms around him before security could intervene.

While the prime minister glad-handed and Elections Canada prepared to start counting about 800,000 mail-in ballots, questions continued to swirl about the wisdom of having called an election in the first place and what the result of the vote would mean for Trudeau’s government — and his own future as Liberal leader.

“Mr. Trudeau has obviously been humbled a bit,” said Jonathan Malloy, a political scientist at Carleton University in Ottawa. “I think his party is still with them, even though they're maybe not very happy about this.”

Unlike in Australia, where a series of sitting prime ministers were tossed by their own parties, Trudeau is not in danger of being ousted from what was formerly known as Langevin Block despite little to show for the election. Yet Malloy believes the blind faith that has characterized the Liberal party under Trudeau will wane.

“The party has really followed Trudeau very loyally,” he said. “And I think they still will, but there's going to be a little less trust in the leader’s judgment and a little more reluctance to just go along with what he has to say.”

Trudeau is also facing the reality that the clock is officially ticking on his leadership, said Elizabeth Goodyear-Grant, a political scientist at Queen’s University in Kingston, Ont. That could spark talk about “legacy projects” that will leave a lasting effect on Canada, while potential successors start jockeying for position.

“I'm not suggesting there's any major factionalism or anything in the party,” she Goodyear-Grant said. “But there are people who are waiting in the wings for their turn. And they will become more critical of the leader and less willing to defer to his vision.”

While Trudeau is secure to remain Liberal leader and prime minister for the foreseeable future, there is no certainty with O’Toole. Despite winning the popular vote for the second election in a row, the Conservatives made little headway in terms of seat gains and will return as the official Opposition.

O’Toole on Monday night sent a clear message that he had no intention of stepping down, and would continue trying to move the Conservative party more toward the centre to appeal to a broader base of voters — a strategy criticized from within his own party throughout the campaign.

The question now is whether Tory members agree with O’Toole’s strategy or reject it — and him.

One factor in that discussion will no doubt be the People’s Party of Canada under Maxime Bernier, which did not win any seats but still saw its popular support more than double to five per cent in part by attracting disaffected Conservatives as well as right-wing ideologues and people opposed to COVID-19 vaccinations and lockdowns.

Jagmeet Singh is also facing questions about his leadership after his second election as NDP leader, but insists he feels secure in his job and has not hit his ceiling.

The NDP has enough seats to hold the balance of power in the House of Commons, as was the case in the last parliamentary session when it propped up the minority Liberal government on several occasions while pushing more progressive policies.

Yet New Democrats had high hopes heading into Monday’s vote that a breakthrough might be coming — and for good reason. Singh was consistently polling high among the other leaders while the NDP had more money to spend than in 2019. The Greens were also in disarray, and the Trudeau Liberals looked vulnerable.

Yet none of that factored into a second orange wave as the NDP appeared on track to win between just one and three new seats, leaving it with around 25 — far short of the 30 that some within the party had identified as a benchmark of success.

Singh on Tuesday expressed disappointment that more NDP candidates were not elected, even as he sidestepped questions about what went wrong with the campaign given the numerous factors lined up in its favour, and where the party goes from here. The only certainty: Singh has no plans to leave.

“I'm going to keep on fighting,” he said during a news conference in Vancouver. “As you know, I'm a fighter. I'm relentless. I will never back down. And I believe that we will make a difference in people's lives.”

The Greens face their own soul searching despite having picked up their first seat in Ontario with the election of Mike Morrice in Kitchener Centre, as the party’s campaign was marked by divisive infighting and ended with leader Annamie Paul’s third failure to earn a seat in the House of Commons.

“This is one party where we can expect to see a change in leader, you don't need a crystal ball for that,” Goodyear-Grant said. “There's a lot of self-examination to be done here on … who can lead the party successfully in the future, but also all the crazy politics that were aired very publicly.”

As for the PPC, Bernier’s populist party was able to latch onto strong anti-vaccine and anti-lockdown sentiments to more than double its share of the popular vote.

“The question for me about the PPC is once the pandemic is done, does their support dissipate back to previous levels?” Goodyear-Grant said. “They have found an issue that has mobilized support, but that issue (the pandemic), it doesn't feel fleeting, but it is temporary.”

This report by The Canadian Press was first published Sept. 21, 2021.