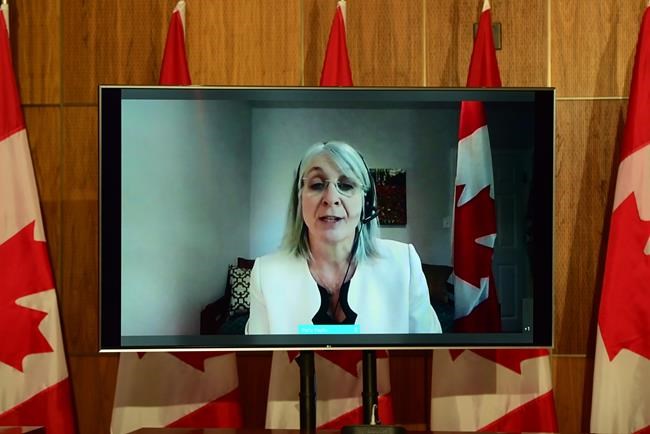 In an interview with The Canadian Press, Hajdu says Ottawa stands ready to help the province with any resources it may need, including staff to assist with record hospitalizations of COVID-19 patients.

The province is reporting 289 people with COVID-19 in hospital — a record high since the pandemic began.

"I really stressed to Minister Merriman the best plan is the one we make ahead of time, and we need to work together to make sure we can adequately understand what Saskatchewan needs might be," Hajdu said Monday.

However, she said Ottawa is paying for 63 additional contact tracers in the province and safe isolation sites.

Merriman has said Saskatchewan isn't in need of help and is expanding its surge capacity of hospital intensive care beds to 175 beds from a baseline of 79.

As a result, staff have been redeployed to work on COVID-19 wards. It has led to cancelled surgeries and medical procedures, which is a form of triage.

Hajdu said if the province is going to need nurses, respiratory therapists or doctors, the federal government needs to know sooner rather than later.

"It is important that we get at least a sense of what they might need and when, and if they could do some modelling against case growth and hospitalization and what that means in terms of their own capacity, that would be very helpful," Hajdu said.

She said she’s been watching the cases, and subsequent hospitalizations, rise in Saskatchewan. It prompted her to remind Merriman that there's help from Ottawa through equipment, medicine, vaccines and specialized staff, she said.

"It's concerning and it's heartbreaking," she said. "Professionals making those decisions to delay people's treatment or change the way they process critical cases is very, very, very heartbreaking.

"But it's also scary for families and Saskatchewan residents who are counting on a health-care system to function when they need it."

Premier Scott Moe told radio talk show host John Gormley on Monday that the pressure on Saskatchewan’s health-care system is "quite extreme" and the province may need help.

"We haven't (asked for help) at this point, and that's not to say we won't have discussions about that this week or as we move forward if we're not able to find a peak in these numbers and in our hospitalization numbers," he said on the show.

Health-care workers have said in recent weeks that the worst is yet to come.

"The peak is several weeks from now. That's not speculation but based on what we have learned over the past 19 months," Dr. Kevin Wasko, a physician executive with the Saskatchewan Health Authority, told The Canadian Press on Twitter.

"What's to come: another COVID Christmas, shattered hopes and a health system that does not meet the needs of the citizenry."