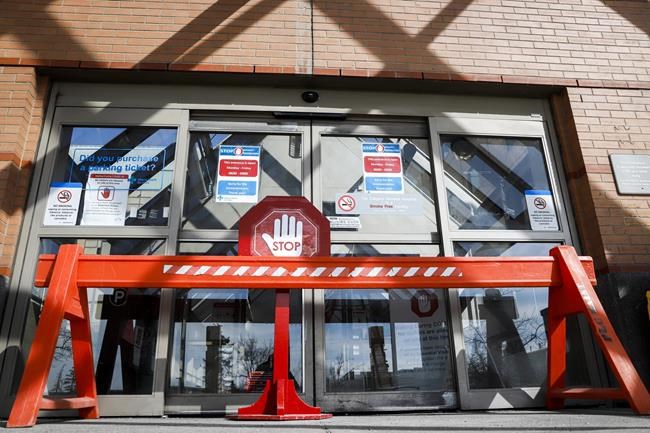 CALGARY — If you think of COVID-19 like a fire, one Grande Prairie doctor would describe Alberta's blaze as out of control with too few resources dedicated to fighting it.

Dr. Alika Lafontaine said if the province doesn't strengthen public health measures to extinguish a relentless fourth wave then the health-care system will burn to the ground.

"At the end of everything, the whole system won't come out unscathed," he said. "A lot of us within health care don't feel that this wave will end until we have decisive leadership."

Lafontaine is president-elect of the Canadian Medical Association, which released a statement on Wednesday calling for lockdowns in Alberta and Saskatchewan to protect health-care systems it says are crumbling under pressures caused by COVID-19.

Both western provinces are setting hospitalization records, and intensive care capacity is running slim to none.

Dr. Katharine Smart, president of the national group, is urging the provincial and federal governments to take immediate action.

"This is beyond anything that the health-care system has ever faced in modern times," Smart said in a phone interview.

"What we're seeing now is essentially no ability to provide any other acute-care medicine beyond care to people with COVID. So, in essence, the health-care system has already collapsed."

The association is calling for short, controlled lockdowns — often called firebreakers or circuit-breakers — that would close schools and non-essential businesses.

It also wants mandatory vaccinations in health-care settings and an increase in the mobility of health workers and intensive care capacity between provinces.

Saskatchewan's proof of vaccination program for health-care employees will begin Thursday and allows workers to show a negative test every seven days as an alternative.

Alberta Health Services is requiring all staff to be fully immunized by Oct. 31.

A group called Health Workers United recently sent a letter to Alberta Health Services objecting to vaccine passports for health-care workers. It was signed by more than 3,500 people, including 75 doctors and more than 1,000 nurses, some of whom did not provide their full names.

Alberta Health Minister Jason Copping said the claims in the letter are misleading and incorrect. He debunked many of them in a statement released Wednesday.

“We need to make decisions based on good information and good advice from health-care professionals. We’re in a crisis due to our low vaccination rate, and the one sure way out of it is for more of us to get vaccinated," said Copping.

Smart said both provinces — which have COVID-19 mortality rates about three times the national average — are facing the "dire realities" of relaxing public health measures too soon.

"There is a lot of resistance from both political parties to really step up with any significant changes in their public health mitigation strategies," she said. "We've seen lots of sort of tinkering around the edges, but no real commitment to doing something meaningful to change this trajectory."

Smart added it's time for "courageous action" and noted that politics must be put aside to allow for collaboration between levels of government.

Prime Minister Justin Trudeau has promised to help Alberta should it enter another lockdown. Federal supports for businesses and individuals would be reinstated if that happened, he said Tuesday.

He reiterated his support during a phone call with Kenney on Wednesday, the premier's press secretary Harrison Fleming said in a statement. He said Kenney asked Ottawa to supply doses of Janssen vaccine, which require only one shot, to the province and spoke about needing rapid antigen tests for employers.

Kenney said Tuesday the province has been in conversations with Ottawa, the Canadian Armed Forces, other provinces and counterparts in the United States for aid, should it be required.

Smart said that need is now.

Despite the ability for provinces like Alberta to add surge capacity to intensive care units, human resources are finite, she said. Health-care workers are facing "huge amounts" of burnout and psychological trauma, she said.

"People cannot keep doing this indefinitely and the system is already totally overrun and collapsing," said Smart, who added that patients and health workers are experiencing unfathomable choices.

"What is happening is as heartbreaking as it was preventable. We are now in a situation where it's all hands on deck to address the state of crisis."

Alberta has more than 20,000 active cases, dwarfing totals in other provinces, thousands of non-urgent surgeries have been cancelled and doctors are being briefed on how to decide who gets life-saving care when resources run out.

Intensive care capacity was at 84 per cent with surge spaces on Wednesday, said Alberta Health Services in a statement. Without 200 additional spaces, the provincial capacity would be at 181 per cent.

There were 313 patients in Alberta ICUs, most of them with COVID-19. Thirty-four deaths were also reported — the highest count since mid-January.

This report by The Canadian Press was first published Sept. 29, 2021

— With files from Mickey Djuric in Regina.