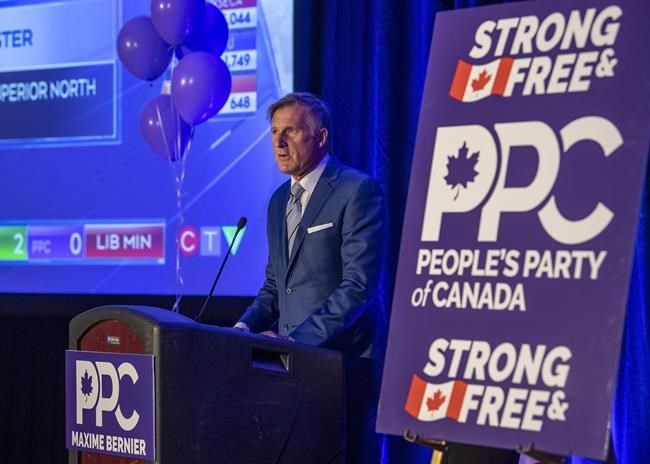 OTTAWA — The former MP leading the review into the Conservatives’ election performance says it will examine how Tories lost votes to Maxime Bernier’s People’s Party of Canada.

One of the questions hanging over the Conservatives is the role Bernier's right-wing populist party played in their loss.

“In Alberta we saw significant bleed of vote to the NDP, so that’s an entirely different situation … in all cases we have to look at where we performed and where we didn’t perform and do that analysis on a riding-by-riding basis, region-by-region basis to better understand what the dynamics are within that vote.”

Conservatives saw losses in both Calgary and Edmonton as Liberal and NDP candidates there attacked Alberta Premier Jason Kenney's handling of the COVID-19 pandemic.

Alberta MP Shannon Stubbs, who was re-elected last month, has expressed concern over her share of the vote dropping since the last election. Earlier this month, she wondered aloud how policies from O'Toole played with conservative-minded voters. That included his promise to keep spending billions of dollars and the confusion created mid-campaign when he decided instead of lifting a Liberal ban on some 1,500 firearms models, to subject it to a review.

Bernier ran his second federal election as PPC leader by deriding the Conservative leader as being a phoney. This time around, however, he shifted his focus away from immigration reform and largely railed against vaccine mandates and other COVID-19 public health restrictions.

O'Toole's candidates, meanwhile, posted their own videos and circulated messages stressing that while Conservatives encourage vaccinations, they believe people should have the freedom to make their own health decisions and would only support bringing in a proof-of-vaccination system for international travel.

Although the PPC failed once again to win any seats in the House of Commons, it mounted enough of a threat that O'Toole spent his final days on the campaign trail issuing increasingly direct warnings to supporters not to split the vote by casting a ballot for Bernier, cautioning that doing so would lead to another Liberal government.

Following the Sept. 20 election, University of Calgary economics professor Trevor Tombe shared an analysis showing 25 seats where together, the Conservative and PPC vote was greater than the winner's share.

He hopes to be finished most of the review work this fall, which will include a one-on-one session with O'Toole.

This report by The Canadian Press was first published Oct. 19, 2021.