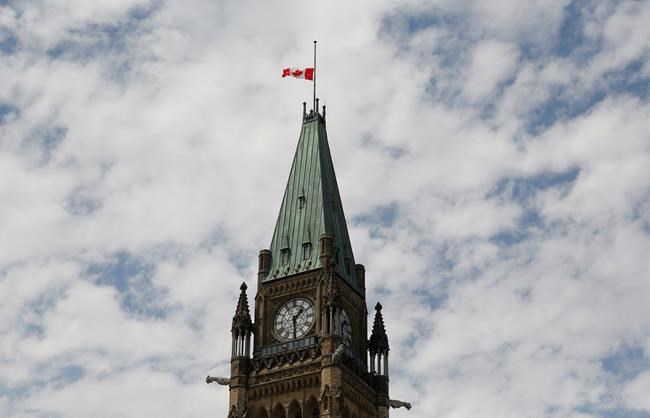 OTTAWA — The Royal Canadian Legion says it plans to raise the flag at the National War Memorial in Ottawa before the Remembrance Day ceremony — and then lower it again to half-mast.

The Legion on Friday recommended that its branches throughout Canada do the same on Nov. 11.

A spokeswoman for the Legion said it was up to individual branches to decide if they want to follow its advice, and whether they keep the flag at half-mast after Remembrance Day.

The flag has been flying at half-mast at federal buildings since late May. Prime Minister Justin Trudeau asked for it to be lowered after the Tk'emlúps te Secwépemc announced that ground-penetrating radar had located what are believed to be the remains of 215 children in unmarked graves at the site of a former residential school in Kamloops, B.C.

Canadian Heritage says flags at government buildings and the Peace Tower remain lowered in memory of Indigenous children who died attending residential schools, as well as survivors and their families.

The department said on Friday that unless the prime minister decides to return the flag to full mast before Remembrance Day, it will remain at half-mast on that day instead of being hoisted up and lowered to half-mast again.

"If a half-masting notice is already in effect for federal buildings and establishments when another half-masting notice — whether mandatory or discretionary — is issued, no action in relation to the national flag of Canada is required," the department wrote in a statement.

The discovery of unmarked graves at residential schools, including 751 unmarked graves found by Cowessess First Nation in Saskatchewan, sent waves of shock and grief across the country.

The government usually determines if the flag at Canada's National War Memorial flies at half mast, but on Remembrance Day the Legion determines what happens there. It is in charge of the annual ceremony marking the sacrifice of Canadians for their country, which includes the laying of wreaths.

"There is a Canadian flag and a British Union flag at the National War Memorial. On Nov. 11, the Legion controls the site and the two flags and will follow Legion protocol. This means the flags will be fully hoisted before the ceremony and will be lowered to half-mast during the ceremony," said Nujma Bond, Legion spokeswoman.

Lowering the flag to half-mast at the National War Memorial and other federal sites is the traditional way of recognizing the sacrifice of Canadian soldiers for their country. The ceremony is marked at 11 a.m. on Nov. 11 — the time and date of the armistice in the First World War.

The Royal Canadian Legion recommended that Legion branches around the country hoist the flag before the Remembrance Day ceremony so it can be lowered in tribute, but said a final decision is up to them.

"If branches and/or commands determine they will follow the recommendation from national headquarters, then after Remembrance Day, they may opt to lower their flags once again — it will be an individual command and branch decision," Bond said.

After Nov. 11, it is up to the government to again decide if the flag stays lowered at the Ottawa memorial.

Canadian Heritage posts notices every time the flag is lowered to half-mast and the current one says it will stay that way until "further notice."

It says the decision about when to raise up the flag lies with Trudeau.

The prime minister has said he plans to keep it lowered until Indigenous Peoples want to see Canada's flag flying fully hoisted.

Trudeau, who was wearing a poppy in his lapel, said at a news conference in the Netherlands that Canada had "created deep and long-lasting ties of friendship with the Netherlands" during the Second World War.

This report by The Canadian Press was first published Oct. 29, 2021.

Note to readers: This is a corrected story. A previous version erroneously reported the Department of Canadian Heritage said the national flag will remain at half-mast leading up to Remembrance Day.