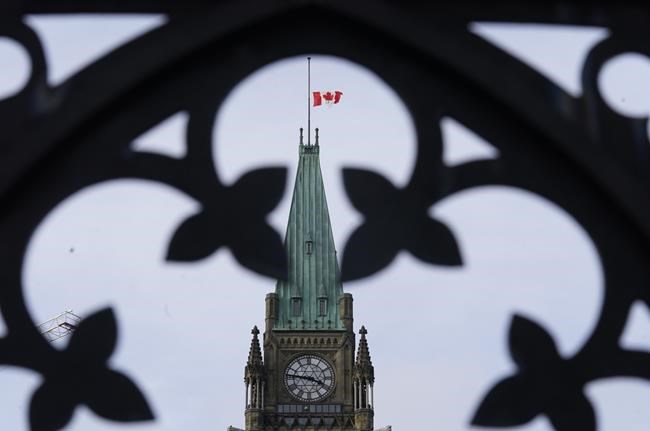 OTTAWA — Prime Minister Justin Trudeau says he is confident a "solution" will be reached to allow Canada to honour its war dead on Remembrance Day by lowering the flag to half-mast.

Trudeau gave his strongest indication yet on Tuesday that the national flag could be raised and then lowered again at federal buildings on Remembrance Day.

Speaking at a news conference during climate talks in Glasgow, the prime minister said the government is working closely with Indigenous groups to find ways to lower the flag to half-mast on Nov. 11.

Traditionally the flag is lowered on Remembrance Day to pay tribute to veterans and Canada's war dead.

The flag has been flying at half-mast at federal buildings since late May, after the location of what are believed to be hundreds of unmarked graves at a former residential school in Kamloops, B.C.

Trudeau has suggested it would be up to Indigenous people to determine when to hoist it again.

He said Tuesday that talks with Indigenous leaders and communities about the issue are ongoing and that he is optimistic about reaching the "right solution."

"There is an understanding of how important it is to be able to lower the flags on Remembrance Day to mark our veterans, to mark people — including Indigenous Peoples — who have stepped up to fight for Canadian values and paid the ultimate sacrifice," he said.

"I am confident that the conversations with Indigenous leadership on making sure we lower the flag once again on Nov. 11 will come to the right solution."

RoseAnne Archibald, the national chief of the Assembly of First Nations, will meet this week with the executive of the organization to discuss its position, her spokesman said.

Grand Chief Stewart Phillip, president of the Union of B.C. Indian Chiefs, said residential school survivors should play a key part in deciding whether to raise the flag.

"We need to respect the residential school survivor movement," he said. "Whatever consensus they reach should be respected."

Lynne Groulx, the CEO of the Native Women’s Association of Canada, said: "We must respect the veterans, many of whom were Indigenous. We must find a way to honour them appropriately on Remembrance Day with traditional flag-related ceremonies. But a solution must be found in which the children who perished at residential schools are also honoured and respected.”

Conservative Leader Erin O'Toole, who served in the air force before entering politics, has spent the past few days calling for the flag to be raised before Nov.11, criticizing Trudeau for having no apparent plan to do so.

"Our flag has been at half-mast for over five months," he said in video released on social media Tuesday.

"It was appropriate to lower it to acknowledge the pain and sorrow of our history with residential schools, but it was inappropriate to keep it down indefinitely."

The Royal Canadian Legion has said it plans to hoist the flag then lower it at the National War Memorial in Ottawa on Nov. 11. The Legion is in charge of what happens at the memorial on Remembrance Day.

It has recommended that Legion branches also hoist and lower the flag at services at cenotaphs across the country.

A two-minute silence at 11 a.m. on Nov. 11 — marking the time and date of the armistice at the end of the First World War — will accompany the lowering of the flag, along with the laying of wreaths and the Last Post bugle call.

Spectators, wearing masks and distancing, will be able to attend the ceremony in Ottawa.

This report by The Canadian Press was first published Nov. 2, 2021.