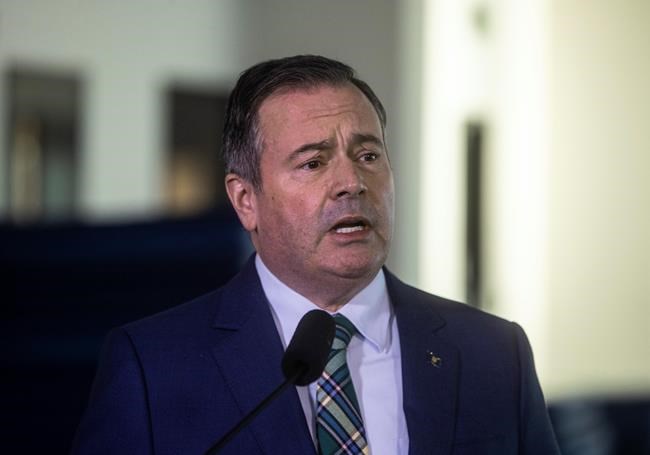 Todd Loewen, an Independent MLA and a former member of Kenney’s caucus, and Opposition NDP critic Thomas Dang have both sent letters to Glen Resler.

Both are responding to unconfirmed reports that Airdrie-Cochrane backbencher, Peter Guthrie, raised with Kenney on Monday.

Guthrie told Kenney he had heard reports of third parties being offered to have their convention fees paid, along with other inducements, in return for votes on premier-friendly issues at the meeting in Calgary.

Loewen and Dang say they have questions over whether such payments, if made, violate provincial fundraising laws.

Elections Alberta cannot by law discuss investigations it may or may not be conducting.

Kenney, asked about Guthrie’s allegations, says it’s not unusual for some delegates, such as young people, to receive financial support to help them attend the meetings.

“I’m not surprised that political organizations are being involved in a political convention. That’s not new,” Kenney said Wednesday. “Of course, we expect they follow all the necessary rules and guidelines.”

Kenney has been dealing with mounting discontent within his caucus and party over his handling of the COVID-19 pandemic and other issues.

Party fundraising is trailing the NDP and Kenney’s popularity poll numbers have plunged in recent months, raising concerns whether the party can win the spring 2023 election with him as leader.

Loewen said he worries the alleged contribution scheme could be used to unfairly tip the balance to vote in new party board members willing to do Kenney’s bidding.

“We want to see fairness in our elections,” Loewen told reporters at the legislature.

Loewen and fellow UCP member Drew Barnes were voted out of caucus in the spring for their criticism of Kenney. Loewen also called for Kenney to resign.

A clash is expected at the Calgary meeting over when to hold the next leadership vote on Kenney. It’s a critical decision. If Kenney were not to win a simple majority, he would be out of the top job.

The vote is to take place in early April at the 2022 annual general meeting in Edmonton.

But 22 UCP constituency associations sent a letter to party president Ryan Becker this week asking that the vote be held  before March 1. That would allow members to vote from their home constituencies rather than having to travel to the Edmonton meeting to cast a ballot.

Some of the constituencies said they want the review because of unhappiness over Kenney’s performance.

The 22 represent one-quarter of UCP constituencies — enough to trigger a fast-tracked review under the bylaws.

But a motion to come up this weekend would boost that threshold to 29. The rationale for the motion is that one- third of constituencies should be required to trigger such a consequential vote.

Loewen and Guthrie called the move blatant manipulation and a violation of the party's grassroots-first ethos.

The party executive and Kenney, however, have said that the motion was discussed, approved and ranked by constituency associations.

“We have a very democratic process,” said Kenney, who added that a change to 29 would mean “a minor change in the party bylaws.”

This report by The Canadian Press was first published Nov. 17, 2021.