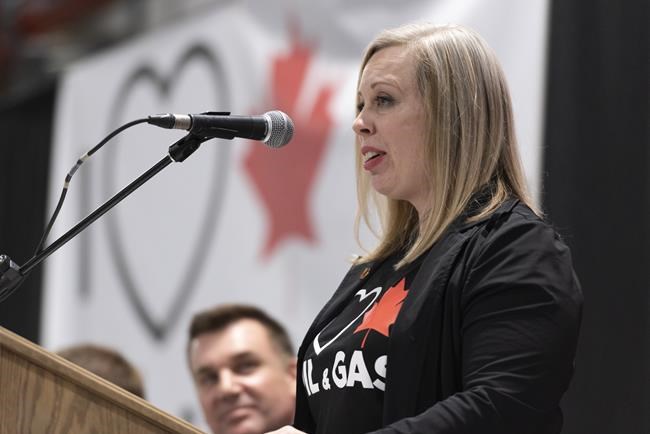 OTTAWA — Sen. Denise Batters may no longer be welcome in the Conservatives' national caucus but she's still a member of the party's Senate caucus.

Conservative senators have chosen to keep Batters in their fold, notwithstanding party leader Erin O'Toole's decision Tuesday to kick her out of the national caucus after she challenged his leadership.

She declined to elaborate, saying that "would encroach on caucus confidentiality."

The decision to keep Batters in their caucus suggests Conservative senators are defying O'Toole, who warned Wednesday that anyone supporting her attempt to force an early confidence vote on his leadership would be kicked out of national caucus for not being a team player.

Beyak was turfed over her defence of residential schools and her refusal to take down posts on her senatorial website that were deemed racist towards Indigenous Peoples. She resigned from the Senate last January before senators could vote on a motion to remove her from the chamber entirely.

Plett himself tweeted his support Tuesday for O'Toole's decision to give Batters the boot.

“As always, I continue to support Erin O’Toole’s strong and principled leadership to unite the Conservative Party of Canada,” he wrote.

But the other 17 Conservative senators evidently had other thoughts on the matter. After meeting separately to discuss it, they've decided to keep Batters in the fold.

But she has said she had a lot of support from senators and MPs alike for her decision to launch a petition Monday aimed at forcing a referendum on O'Toole's leadership within six months, rather than wait for a scheduled leadership review at the party's national convention in 2023.

And she has questioned why O'Toole dumped her when he did nothing about fellow Conservative Sen. Michael MacDonald, who has also challenged O'Toole's fitness to lead.

Before the first national caucus meeting after the Sept. 20 election, MacDonald wrote Conservative MPs urging them to give themselves the power to oust the leader.

"The status quo under the present circumstances is a mistake and a gift to the Liberals that this party and this country cannot afford,” he wrote.

Like Batters, MacDonald said O'Toole's bid to present a more moderate, centrist party was a failure, resulting in a loss of seats in the election and none of the promised breakthroughs in Central Canada.

This report by The Canadian Press was first published Nov. 18, 2021.