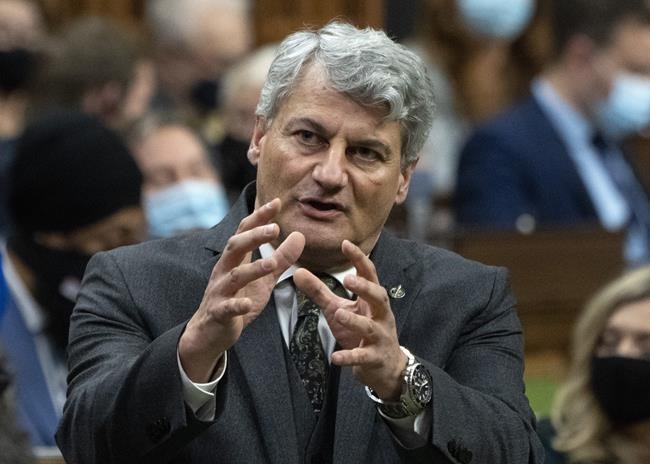 OTTAWA — The Conservatives have rejected a proposed compromise to resolve a long-running dispute over the disclosure of secret documents related to the firing of two scientists at Canada's highest security laboratory.

He pointed out that in the previous parliamentary session the Public Health Agency of Canada ignored multiple orders from a Commons committee and the House itself to produce unredacted documents that could shed light on the firing of scientists Xiangguo Qiu and her husband, Keding Cheng.

"The will of Parliament is clear and that has not changed," Deltell told the Commons.

The two scientists were escorted out of Winnipeg’s National Microbiology Laboratory in July 2019 and subsequently fired last January.

Last week, government House leader Mark Holland proposed a compromise: creating a special all-party committee to review the documents, with a panel of three former senior judges determining what could be made public without jeopardizing national security.

At that time, Holland argued that the former Conservative government of Stephen Harper adopted a similar process in 2010 to allow MPs to view unredacted documents related to the alleged abusive treatment of detainees turned over to Afghan authorities by the Canadian military.

But Deltell said that's an "apples and oranges" comparison. In the Afghan detainee case, opposition parties were demanding to see 40,000 pages of uncensored documents that could endanger the lives of Canadian soldiers in Afghanistan.

By contrast, he said opposition parties banded together in the previous Parliament to demand just over 500 pages of unredacted PHAC documents, which would be vetted by the parliamentary law clerk to determine what could be safely released, although MPs would retain the right to publicly release redacted material.

Speaker Anthony Rota sided with opposition parties in June, ruling that the Commons and its committees have the right to order the production of any documents they please, regardless of national security or privacy laws.

The battle culminated with Iain Stewart, then head of PHAC, being hauled before the bar of the Commons to be reprimanded by Rota over his repeated refusal to comply with the order to produce the unredacted documents. He was the first non-MP to be subjected to such a procedure in more than a century.

The government applied to the Federal Court of Canada a few days later to prevent the release of the documents, which it maintained would be injurious to international relations, national defence, or national security.

It dropped the case when the election was called in August since the order to produce the documents, along with all other business before the House, was terminated with the dissolution of Parliament.

Far from seeking a compromise, Deltell said Wednesday the Liberal government's approach has been "to deny, then to deflect and, finally, to litigate in an entirely shocking and unprecedented court application against the House of Commons."

He reiterated a point of privilege he raised last month in the opening week of the new parliamentary session, asking Rota to rule that the court application constitutes contempt of Parliament. Should Rota agree, the Conservatives intend to move a motion, supported by other opposition parties, to issue a warrant to seize the PHAC documents.

Holland said he was "disappointed" with the Conservatives' rejection of his proposed compromise. And he accused them of being reckless and irresponsible about national security.

"If we are creating a circumstance where we are treating national security documents like Canadian Tire flyers and allow them to fly everywhere around this place, that is enormously injurious to national security," he said in an interview, adding that it could prompt allies to stop sharing security information with Canada and even endanger the lives of Canadians involved in national security.

"To come from the Conservatives, a party that was in power, to have such a reckless and irresponsible position on national security documents is just incredibly disappointing."

Holland said he remains hopeful that the NDP and Bloc Quebecois will be more reasonable. He would need the support of at least one of them to proceed with the proposed compromise.

The opposition parties' demand for documents includes material related to the transfer, overseen by Qiu, of deadly Ebola and Henipah viruses to China's Wuhan Institute of Virology in March 2019.

Stewart, who is no longer the head of PHAC, had assured MPs that the transfer had nothing to do with the subsequent firings of Qiu and her husband and that there was no connection to COVID-19.

The coronavirus first appeared in China's Wuhan province and some believe it may have been released accidentally by the virology institute, triggering a global pandemic.

Despite Stewart's assurances, opposition parties continue to suspect a link and have remained determined to see the unredacted documents.

This report by The Canadian Press was first published Dec. 8, 2021.