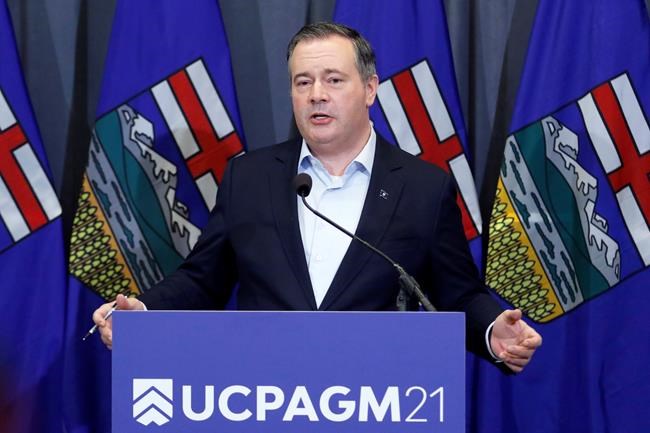 EDMONTON — Alberta's United Conservative Party says it will hold a one-day special meeting in April for a confidence vote on the leadership of Premier Jason Kenney.

The move comes after a number of UCP constituency associations asked last month for a fast-tracked leadership review of Kenney, saying they had met the requirement of 22 board resolutions to mandate the meeting.

The UCP board, in a statement, says it did not receive 22 resolutions but that it will hold the special one-day vote in Red Deer on April 9.

The 22 boards had asked for a review before March 1 and for it to be conducted virtually so everyone could participate without excessive travel.

But the party's executive says April 9 is early enough and it will be held in a central community to make it easier for everyone to attend.

Kenney has been facing internal criticism and falling poll numbers due mainly to his handling of the COVID-19 pandemic.

If he receives less than 50 per cent of the vote, he is out as party leader.

“Your provincial board of directors has listened to grassroots feedback and charted a new path forward for next year’s leadership review,” party president Cynthia Moore told members in an email shared by the executive.

"The board is reducing barriers to entry while upholding our bylaws and traditions.

"We will hold the review at a special general meeting on April 9, 2022, in Red Deer. It will be a stand-alone, single-day event, without the need to conduct policy and governance plenaries and board elections as required at an annual general meeting. This will allow us to significantly reduce registration costs, and by having it in Red Deer, we are putting it in a central location.”

The leadership review had been scheduled to take place in the fall of 2022, but Kenney and the board agreed to move it up due to rising discontent in caucus over Kenney's leadership.