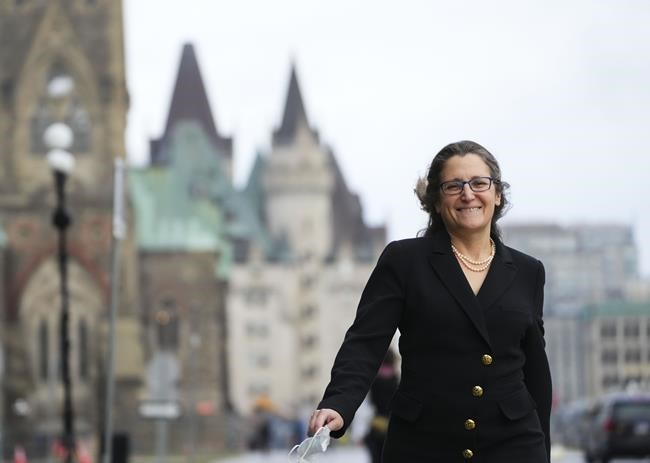 OTTAWA — Finance Minister Chrystia Freeland says the need for MPs to approve a new round of pandemic aid has become more important amid fears related to the Omicron variant of COVID-19.

Speaking to the House of Commons finance committee, Freeland says the variant has injected renewed uncertainty into the economy, in arguing for the government's latest benefits package.

The Liberals are proposing to extend pandemic aid until early May to still-hurting businesses and provide a $300-a-week benefit to workers subject to a lockdown as part of a $7.4 billion aid bill before the House of Commons.

The Liberals want the bill, known as C-2, to get approval before parliamentarians go on their winter break at the end of next week.

Freeland said the lockdown support contained in the bill would act as an economic insurance policy if there is another surge in the virus or new variants of concern.

"Recent developments related to the Omicron variant serve as a reminder that the fight against COVID is not yet over and they underscore the importance of the key aspects of bill C-2," Freeland said in her opening remarks to the committee.

"It would enable the government to take immediate action to support workers in businesses directly affected by local lockdowns should the public health situation require it."

She added that cabinet, which gets to decide what regions are in a lockdown to qualify under the terms of the bill, would be open to regions saying their workers needed help. Freeland said she was not aware of any regions asking for the help retroactive to late October.

Freeland's two-hour appearance, which was part of an agreement with opposition parties to fast-track the aid bill through the House of Commons, quickly turned to other budgetary and economic concerns from opposition parties.

Pressed by the Conservatives about inflation and the federal debt, Freeland said a full accounting of federal finances will be given on Tuesday when the government releases a fiscal and economic update.

Signals coming out of the Finance Department suggest that Tuesday's economic update won't contain a bevvy of new spending measures, but will rather be limited in scope.

The Canadian Chamber of Commerce on Thursday called on Freeland to provide more than a cursory update and unveil a plan to boost economic growth above the anemic expectations from economists.

"Unless we can achieve sustained growth at a much higher level than we experienced prior to the pandemic, we won’t be building back better, but failing forward," chamber president Perrin Beatty said in a statement.

"Without significant growth to pay for our social and climate ambitions, we will find ourselves on a path of ill-timed increased taxes for Canadian families and business owners."

Budget officer Yves Giroux's office has previously estimated that extending the rent subsidy will cost $676 million, and adding extra weeks to the sickness and caregiving benefits would cost $373.8 million and $554 million.

On Thursday, his office estimated a wage subsidy extension would cost over $5.4 billion. The majority, about $4.8 billion, in subsidies flowing to businesses that continue to see a steep, and persistent drop in revenues, and the remaining $666 million going out under a program targeting hard-hit companies in the tourism and hospitality sector.

Thursday's report said the federal government's plan to extend its wage subsidy will push the overall price for the program to almost $106.7 billion.

Speaking to a Senate committee in the morning, Giroux noted the government was asking Parliament to approve $8.7 billion in extra spending for this fiscal year. He said total proposed federal spending this fiscal year is just under $400 billion.

"I have concerns, however, with the fact that the government is seeking Parliament's approval of this additional spending without yet revealing what was spent the year prior," Giroux told senators, adding he saw no reason for the delay in releasing the accounting documents.