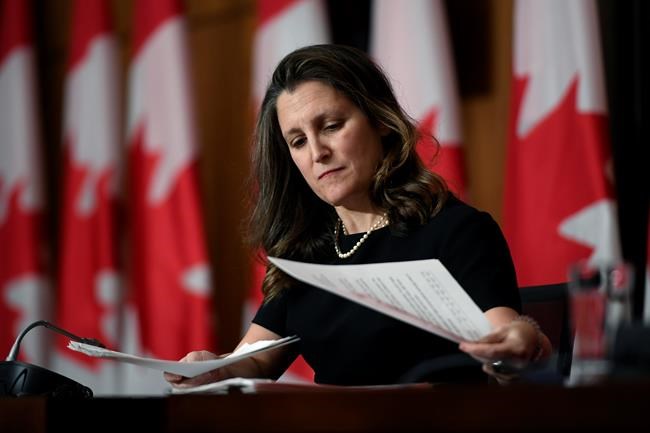 OTTAWA — The Liberals have found themselves with a financial windfall amid an economic rebound, though the extra room is largely spoken for thanks to COVID-19 measures and relief for flooded British Columbia.

Finance Minister Chrystia Freeland’s update released Tuesday, which she did virtually due to COVID-19 concerns, shows that the deficit for this year is on track to hit $144.5 billion, below the government’s previous forecast of a $154.7 billion deficit.

The better-than-expected result is from billions in new tax revenues that gave the government $38.5 billion in extra spending room.

But the update shows how quickly that extra room has been eaten up by $28.4 billion in new and preplanned spending since April’s federal budget.

Among the new measures are $5 billion to help British Columbia rebuild after devastating flooding and $4.5 billion to respond to the Omicron variant of COVID-19, including measures at the border and benefits for workers subject to a lockdown.

There is $742.4 million set aside to help some 200,000 low-income seniors recoup drops in the value of their guaranteed income supplement payments after they received emergency aid last year. The payments are not expected to go out until next May.

Freeland told reporters ahead of the document’s public release that Tuesday’s update wasn’t the master plan for the Canadian economy going forward. That is coming in next year’s budget, she said.

It is in that document that the government could outline tens of billions in Liberal election pledges.

Robert Asselin, senior vice-president for policy at the Business Council of Canada, says there several big things on the horizon that could strain federal books in the coming years without a big bump in economic growth.

That would include paying for those Liberal campaign promises, the transition to a green economy, higher health-care transfers to provinces, as well as any new wrinkle in the COVID-19 pandemic.

The pandemic ended up playing a role in disrupting Tuesday’s event.

Earlier Tuesday, Freeland said on Twitter that two of her staffers tested positive for COVID-19 after taking rapid antigen tests and that while she has had two negative molecular tests, she would present her update virtually out of "an abundance of caution."

"Today, two members of my staff, who used rapid antigen tests as a precaution, received a positive test result," Freeland said on Twitter about 90 minutes before she was to rise in the House of Commons and deliver her update.

"They are self-isolating at home. I have not had direct contact with them. The rest of my staff in Ottawa have had negative antigen tests today."

The economy has been on a roller-coaster ride since the onset of the pandemic but has been on an upswing over the past few months.

The government now expects the economy to grow this year by 4.6 per cent, a few ticks below the Bank of Canada’s most recent outlook, as well as grow faster than expected in the next two years.

The unemployment rate in November almost reached its pre-pandemic reading of 5.7 per cent in February 2020. The Finance Department expects the country to get there in 2023 under the revised outlook.

The outlook for inflation has also been revised up from the spring budget with the government expecting the consumer price index to increase 3.3 per cent this year, and 3.1 per next year, before coming back closer to the Bank of Canada’s two-per-cent target in 2023.

This report by The Canadian Press was first published Dec. 14, 2021.