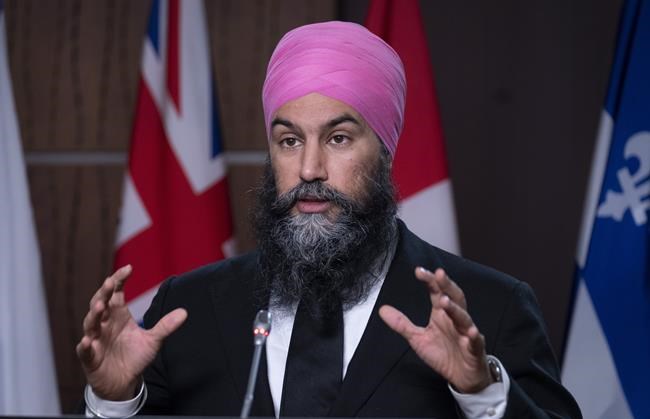 OTTAWA — Jagmeet Singh says he would support federal intervention in a court challenge to a Quebec law known as Bill 21, which bans teachers and some other public-sector workers from wearing religious symbols on the job.

The NDP leader said Tuesday he always believed the law was discriminatory but has hardened his stance on court action following the case of a teacher in Chelsea, Que., who was reassigned because she wears a hijab.

Fatemeh Anvari, a Grade 3 teacher, was told she could no longer teach in a classroom because her hijab contravened the Quebec law.

Parents and children, along with community members, have protested outside the school to voice opposition to the law and express support for the teacher.

Speaking at an Ottawa news conference, Singh said it was unfair that a Muslim woman who wears a hijab would not be allowed to teach in Quebec, but her brother, who does not wear any religious symbols, would be permitted to do the job.

"Given what we have seen in Chelsea, given that we saw a woman that was removed from the classroom just because of the way she looks … now is the moment to be very clear and say if this case gets to the federal level then the federal government should support the three million Quebecers who are opposed to this law and opposed to discrimination," he said.

Singh has previously criticized the law but stopped short of calling for federal intervention in the past.

The NDP leader, who is Sikh and wears a turban, said Tuesday he has experienced discrimination himself.

"The federal government should support the Quebecers who are fighting this discrimination in court," he added.

Prime Minister Justin Trudeau said earlier this week that he deeply disagrees with Bill 21 and his government has not ruled out intervening in a legal battle against the law "at some point in time."

Tory Leader Erin O'Toole has said the issue is a matter for Quebec.

At a news conference on Tuesday, Bloc Québécois Leader Yves-François Blanchet said in French: "We understand in Quebec, once again, that the federal parties are unanimously against Quebec on the issue of secularism."

This report by The Canadian Press was first published Dec. 14, 2021.