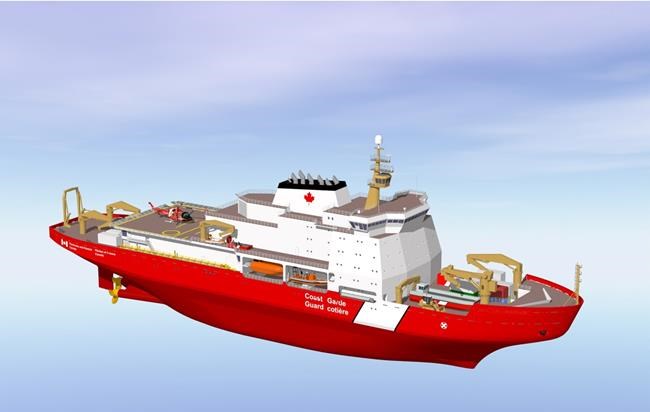 OTTAWA — The federal government's plan to build new ships for Canada's navy and coast guard has been hit by more skyrocketing costs.

That represents a dramatic increase over the government's most recent estimate, released back in 2013, that it would cost $1.3 billion to build one such vessel.

Part of the difference is obviously tied to the decision to build two of the heavy icebreakers instead of one. The Liberal government announced without warning in May the addition of another ship to its plans.

Yet Giroux told reporters during a briefing that the plan to have the two ships built at different shipyards — Seaspan Shipyards in Vancouver and Quebec-based Chantier Davie — will add between $600 million and $800 million to the overall cost.

"In naval construction projects, there are economies of scale and learning factors that would be accrued should the contract be to the same shipyard," he said. Splitting the contract, he said, "will not lead to these natural learning improvements."

Other factors identified by Giroux as driving the cost increase include delays in the entire project.

The government has not provided its own cost estimate on the two icebreakers.

The decision to add a second icebreaker and split the work between Vancouver and Lévis, near Quebec City, has been seen by some analysts as intended to help the Liberals' electoral chances in those two politically important communities.

The government has argued that dividing the work will ensure the ships are delivered faster, and Giroux’s report suggests the first icebreaker could be ready in 2030 while the second could be delivered the following year.

Yet that is contingent on steel being cut in Vancouver by 2023-24, a potentially tall order given Seaspan has repeatedly struggled to meet past timelines when it comes to other shipbuilding projects.

Those include the navy’s new support ships, which are already years late and billions over budget, and a new offshore science vessel for the coast guard, which was originally budgeted at around $100 million but is now nearing $1 billion in cost.

Davie, meanwhile, has yet to be formally accepted as the third shipyard alongside Seaspan and Halifax-based Irving Shipbuilding in the federal government’s national shipbuilding procurement agreement.

That is despite the Quebec shipyard, which has staged numerous public relations and lobbying campaigns over the years for federal work, having emerged in December 2019 as the only pre-qualified bidder to join the procurement strategy.

The government has said work is underway to ensure Davie can meet its requirements, but otherwise offered no timeline on when it will be finished, leaving the shipyard in a kind of limbo.

Giroux estimates a one-year delay in construction of the two vessels would add $235 million to the overall cost while a two-year delay would result in a $472-million increase.

The government revised its estimate to $1.3 billion in 2013, at which point the Diefenbaker had been awarded to Seaspan along with four smaller coast guard vessels and the two navy support ships.

After Seaspan ran into problems delivering on those vessels, however, partly due to problems at the shipyard but also thanks to mismanagement and poor planning in Ottawa, the Liberals quietly removed the Diefenbaker from Seaspan’s order book in 2019.

The decision to build two polar icebreakers, announced months before the 2021 federal election, caught many by surprise.

Giroux’s report on the polar icebreakers is only the latest to show skyrocketing costs in Ottawa’s plan to build new navy and coast guard ships, which was first launched in 2010 to keep costs under control and maximize the benefits to Canada’s economy.

One of the budget officer’s most recent reports estimated the cost of 15 new warships for the navy at more than $77 billion, which is $17 billion more than the government’s own estimate and three times the original $26 billion budget.

Giroux said it has become clear that the government’s drive to build ships in Canada rather than overseas comes with a “significant premium” in terms of cost. The question of whether that premium is worth it is a political discussion that needs to take place, he said.

“It's a question that's eminently political, because there are regional benefits that need to be taken into account and also the issue of national security when it comes to maintaining the capacity to build these types of ships domestically,” he said.

This report by The Canadian Press was first published on Dec. 16, 2021.