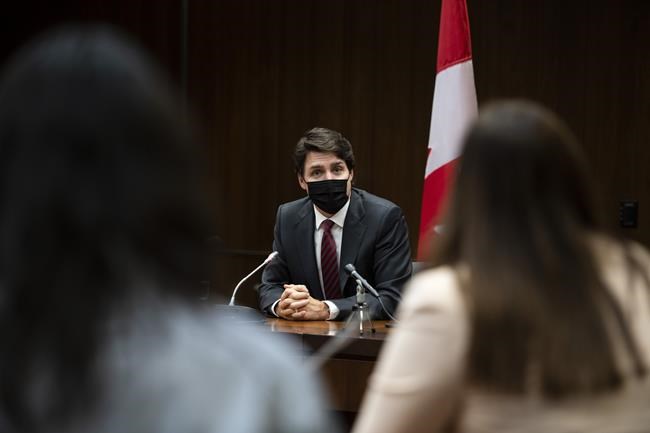 OTTAWA — Prime Minister Justin Trudeau shares his late father's disdain for the constitutional "notwithstanding clause" and he's not ruling out asking the Supreme Court to weigh in on Quebec's pre-emptive use of it to trample the rights of religious minorities.

In a year-end interview with the Ottawa bureau of The Canadian Press,   Trudeau said the the Charter of Rights and Freedoms is supposed to be "a bulwark against popular measures that attack the rights of … minorities."

"It's basically a loophole that allows a majority to override fundamental rights of a minority. And that's why I agree with my father that it's not a great thing to have in a Charter of Rights and Freedoms."

The clause enables federal and provincial governments to enact laws that violate certain rights and freedoms guaranteed in the charter. They can invoke the clause for renewable periods of five years.

Controversy over the override clause has heated up recently with the news that a Muslim teacher was removed from her elementary school  classroom in Chelsea, Que., because she wears a hijab — in violation of Quebec's two-year old secularism law.

The law, known as Bill 21, prohibits public sector workers considered to be in positions of authority, including police, judges and teachers, from displaying or wearing religious symbols while at work. The Quebec government pre-emptively invoked the notwithstanding clause to prevent the courts from striking down the law as a violation of the charter.

During negotiations with premiers to patriate Canada's Constitution with a charter of rights in 1982, Trudeau's father, former prime minister Pierre Trudeau, reluctantly agreed to provincial demands for a notwithstanding clause. His calculation, his son said, was that it was better to have a charter with the clause "than to not have a charter at all."

The thinking at the time was that the clause would be invoked sparingly because Canadians would exact a high political price on any government that used it to infringe upon fundamental rights.

"Unfortunately, many years later that political cost hasn't appeared or materialized in a way that perhaps my father would have hoped and we now get to reflect on whether or not there can even be pre-emptive use of the notwithstanding clause," Trudeau said.

Quebec has also invoked the clause pre-emptively to thwart court challenges to Bill 96, which would bolster French as the province's official language. Some anglophones in the province fear this will come at the expense of their minority rights.

Quebec is not the only province to invoke the clause. Ontario Premier Doug Ford used it recently to re-impose restrictions on third-party election advertising that had been struck down as unconstitutional. And he threatened in the past to use it on legislation that slashed the size of Toronto city council.

No federal government has ever invoked the clause.

Some constitutional experts have suggested that drafters of the charter never intended for the notwithstanding clause to be used pre-emptively. Rather, it was envisioned as a safety-valve mechanism to enable a government to reinstate a law that's found by the courts to violate the charter.

Trudeau, who has not ruled out federal intervention "at the appropriate time" in the ongoing court battle over the secularism law, said his government is "in constant and full reflection on different avenues that could be taken." He indicated those avenues could include a reference to the Supreme Court to clarify how the notwithstanding clause should be used.

"The ultimate reflection I have is what would be most effective in continuing to move Canada forward in the right way and ensuring that people's rights are protected," he said.

"And that is the lens at which we look at everything, including timing of a potential future intervention, how we position ourselves now, whether we do references to the Supreme Court."

Prompted by Brampton Mayor Patrick Brown, a number of city councils, including Toronto's, are donating or considering donating money to aid the legal battle against the secularism law, which is being challenged by the Canadian Civil Liberties Association and the National Council of Canadian Muslims, among others.

Trudeau said that "underlines how there are a lot of people who are asking the question: can a society that wants to be free and open really force a woman … or force anyone to choose between his religion and his job?"

Quebecers themselves are reflecting on that question, he noted, adding that polls suggest Quebecers are among the most fervent supporters of the charter of rights.

While such reflections should be encouraged, Trudeau added: "What scares me is, if it starts to turn into 'Quebec bashing,' it will harm the conversation."

Trudeau was clear that he is opposed to the secularism law as it applies other public sector workers, not just teachers.

"I think that when you … start to say that someone who is religious would make a worse policeman or judge than someone else, you are undermining the confidence that people can have in our institutions,” he said in French.

This report by The Canadian Press was first published Dec. 17, 2021.