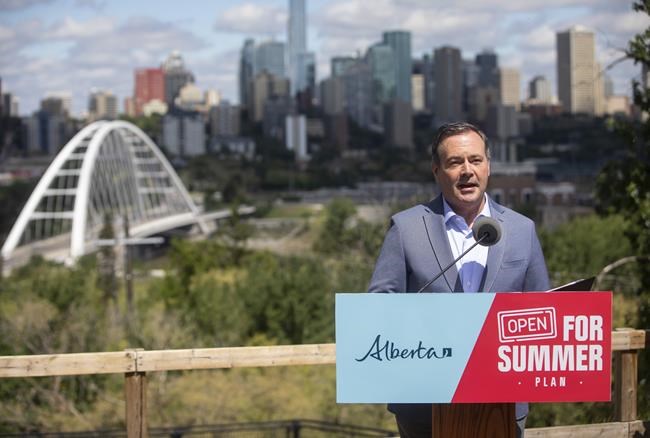 In 2022, Kenney and his United Conservative government aim to forge ahead on the economy and catch up on the thousands of surgeries cancelled when hospitals were overwhelmed during the fourth wave of COVID-19 in the fall.

Health Minister Jason Copping said it will take some time. The goal is to catch up on the pre-pandemic surgery waiting list of 68,000 by the middle of next year.

"That is my job No. 1 apart from the response to COVID, of course," Copping said earlier this month, announcing that the number of cancelled surgeries had stabilized at about 81,000. "We are going to bring that waiting list down."

The wind is in the UCP's sails, at least in the short term, with a late-year bounty of oil and gas revenues slashing the projected budget deficit by two-thirds to under $6 billion.

There was other good economic news.

Tech-giant Amazon Web Services announced in November it had broken ground on a $4.3-billion cloud-computing server hub in Calgary.

Big budget film productions leveraged tax credits to shoot in the province — including HBO's "The Last of Us" — and pumped millions of dollars into local economies.

"Albertans are natural optimists. They just need a reason for their optimism. Well, there are lots of reasons right now including the fact that we are leading Canada by far in economic growth," Kenney told the Calgary Chamber of Commerce this month.

There was a $3.8-billion deal with the federal government that will see daycare costs start to drop in January and fall to $10 a day by 2026.

Doug Schweitzer, minister for jobs, economy and innovation, announced: "This was the year that Alberta got our swagger back."

Kenney struck a similar triumphant tone on June 18 in his speech on a sunlit day near Edmonton’s river valley.

He announced Alberta would end almost all COVID-19 health restrictions as of July 1 — in time for Alberta's signature Calgary Stampede rodeo and festival.

It was the fastest reopening in Canada, but one Kenney said was justified by sufficient vaccination rates.

Kenney said his government wasn't planning for a worst-case scenario and chided reporters and medical experts for suggesting it could even happen. His party sold it as "the Best Summer Ever" and marketed hats trumpeting the feel-good slogan.

The government then failed to act as cases spiralled in August and didn’t change course until September. Deaths mounted, officials scrambled to double the intensive care unit capacity, army medics were called in and 15,000 reported surgeries across the province, including cancer operations, were delayed.

Kenney introduced a form of vaccine passport and other restrictions that boosted vaccinations and reduced hospital cases. It seemed to help pull the system back from the brink.

The premier took responsibility, saying "the buck stops with me."

But the mea culpa had asterisks: other provinces had problems, too; he didn’t act sooner because he wasn't sure COVID-19 weary-Albertans would follow the rules; he would have acted sooner, but he was waiting for Dr. Deena Hinshaw, the chief medical officer of health, to propose changes.

COVID-19 conflicts and controversies sent Kenney's popularity numbers plunging and opened deep and, at times, public rifts within his caucus and party.

Critics said Kenney was late to impose health rules for the last three waves, endangering health-system capacity, because he feared alienating anti-vaccination elements in his party.

Kenney, under pressure from cabinet and later by about two dozen constituency associations, agreed to move up a review of his leadership to a one-day vote April 9 in Red Deer from late 2022.

Jean, one of the party's co-founders, won the nomination to represent Fort McMurray-Lac La Biche in an upcoming byelection. He's running on a platform to end Kenney's time as leader, saying Kenney’s top-down style and bungled decisions on COVID-19 can't be redeemed and that the party needs a new leader if it hopes to win the 2023 election.

"Kenney's pinning everything on (oil and gas prices)," said political scientist Duane Bratt of Calgary's Mount Royal University. "The other story of 2021, obviously, is COVID.

"At almost every step of the way, the government acts later than anybody else in the country and responds weaker than everybody else in the country, is defiant about what they’re doing, and then gradually reverses course. We'll have to see what occurs in January if Omicron (variant of COVID-19) does become as serious as some believe."

This report by The Canadian Press was first published on Dec. 29, 2021.