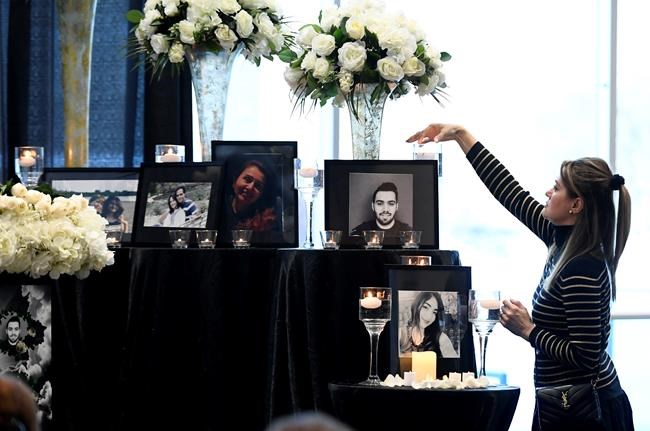 OTTAWA — Iran has snubbed yet another deadline set by Canada and its allies to negotiate a settlement for the families of those killed when its military shot down a passenger jet two years ago.

And that comes as no surprise to the spokesman for families and loved ones of the people killed on Jan. 8, 2020, when Iran's Revolutionary Guard shot down Ukraine International Airlines Flight 752.

All 176 people on board died, including 55 Canadian citizens and 30 permanent residents, along with nationals of Britain, Ukraine, Afghanistan and Sweden.

The coalition of countries, which calls itself the International Co-ordination and Response Group, had last month given Iran a deadline of Wednesday to come to the bargaining table and negotiate compensation for the victims' loved ones.

But there was no response from Iran, part of a pattern that has seen the coalition of countries and international aviation authorities repeatedly stonewalled on investigating the shootdown and holding the perpetrators to account.

Hamed Esmaeilion, whose wife and nine-year-old daughter died in the tragedy, called on Canada and its allies to refer the matter to the International Civil Aviation Organization for more aggressive action toward Iran.

"This case should have gone to ICAO a long time ago. We had said to all these governments since the beginning that Iran won't comply. They decided to learn it the hard way," Esmaeilion said Wednesday.

Esmaeilion, the spokesman for the Association of Victims' Families of Flight PS752, has in the past criticized the ICAO for failing to hold Iran accountable and enforce international aviation rules.

"This case will be referred to ICAO immediately. Today. Now. Today diplomacy ends and justice begins."

He also called on the RCMP to open "a criminal case immediately based on the terrorist nature of this crime."

A spokeswoman for Global Affairs Canada said that the government remains committed to "seeking answers and pursuing justice for this tragedy for the victims and their families."

Foreign Affairs Minister Mélanie Joly has also met with families and counterparts in other countries in the coalition, said spokeswoman Lama Khodr in an emailed response to questions.

Canada and its coalition countries had initially asked Iran to discuss compensation during the week of Jan. 17, but because Iran showed "apparent reluctance," that deadline was moved up to Wednesday, said Khodr, referring to a December statement from the group of countries.

In its Dec. 16 statement, the response group said that if it had no response from Iran by Jan. 5, "we will have to assume that further attempts to negotiate reparations with Iran are futile. The Co-ordination Group will have to seriously consider other actions to resolve this matter within the framework of international law."

The Jan. 8, 2020, tragedy unfolded against a backdrop of escalating violence in the region. Days earlier, a U.S. drone strike killed Iran's top military commander in Iraq.

Iran then retaliated by launching missile attacks on bases in Iraq where American troops were stationed. Canadian troops were also stationed on the base as part of an international mission. No military personnel were harmed.

Iran has blamed human error, but Canada and its allies have dismissed the explanation and demanded a full accounting from the country — demands that have essentially fallen on deaf ears in Tehran.

Prime Minister Justin Trudeau noted the upcoming second anniversary of the tragedy in remarks at a news conference on Wednesday.

"This is also a difficult time of year as we remember the victims of flight PS752 and other air disasters. Families who continue to grieve who celebrated yet another holiday season with empty spaces around the table," he said.

This report by The Canadian Press was first published Jan. 5, 2022.