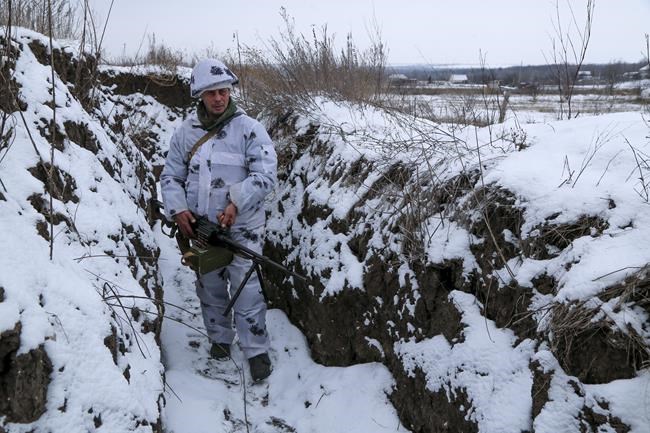 OTTAWA — As the Trudeau government wraps its cabinet retreat Wednesday, its handling of the Ukraine-Russia crisis faces growing criticism for being soft and superficial while rendering Canada missing in action with its allies.

The criticism comes from not only the Conservative Opposition but from a former Canadian analyst in Europe who was on the diplomatic front lines of the political tensions between Ukraine and Russia.

Prime Minister Justin Trudeau's government also faces pressure from Ukrainians of Canadian descent who are amplifying the requests by Ukrainian leadership in Kyiv for several key asks that he and Foreign Affairs Minister Mélanie Joly have repeatedly deflected.

Those asks are to provide weapons to the Ukraine military, impose further sanctions on Russia and extend Canada's military training mission of its forces beyond its expiry date at the end of March.

"For a country which professes to be one of Ukraine's closest allies the soft, tentative language being used by Canadian officials such as Foreign Affairs Minister Joly is a real head-scratcher," said Michael Bociurkiw, a Canadian who served as the spokesman for the Organization for Security and Co-operation in Europe during the height of tensions following Russia's annexation of Ukraine's Crimean Peninsula in 2014.

"Language such as 'we are deeply concerned' doesn't reflect the outrage felt by most Ukrainian Canadians at what's currently transpiring on Ukraine's borders … this government's modus operandi is repeat the right buzz words without actually saying anything substantial."

That is unfortunate because Canada is well-positioned to provide a concrete response — including providing weapons — due to the expertise it has built up by deploying Canadian Forces personnel, RCMP officers and various diplomatic and development experts to Ukraine, said Bociurkiw, now a senior fellow with the Washington-based Atlantic Council.

Russia has positioned about 100,000 troops across Ukraine's borders along with tanks and other heavy artillery, raising fears across Europe of an invasion, something Russia has denied.

The Conservatives are questioning why Trudeau was left out of a meeting that U.S. President Joe Biden hosted on Monday from the White House situation room with several key European leaders.

"Justin Trudeau is not on this list. This is what happens when you fail to stand up for Ukraine," tweeted Conservative MP James Bezan, who has been banned from travelling to Russia for his outspoken advocacy for Ukraine over the years.

Trudeau's office explained his absence from the Biden meeting by saying the government has been working closely with the Ukrainian government and its international partners, including recent discussions with Biden, Scholz, Ukrainian President Volodymyr Zelenskyy and Swedish Prime Minister Magdalena Andersson. It also noted a weekend phone call between Joly and U.S. Secretary of State Antony Blinken and a recent phone call between Defence Minister Anita Anand and her American counterparts.

"We stand by our friends in Ukraine and will continue to be there for the Ukrainian people alongside our allies as we have with military training missions, as well as financial and economic supports," said spokeswoman Cecely Roy in an email.

Roy also noted that Canada gave Ukraine a $120-million loan aimed at bolstering the country's economy in the face of the Russian threat.

On Tuesday, Bezan, Conservative foreign-affairs critic Michael Chong and the party's procurement critic Pierre Paul-Hus called on the government to redirect weapons to Ukraine that were originally intended for Kurdish Peshmerga fighters in northern Iraq.

"With more and more signs of a potential Russian invasion of Ukraine, the time for waffling by Prime Minister Trudeau must end," the three Conservatives said a statement.

Bociurkiw said Canada should have long ago sent weapons to Ukraine because "they can't be integrated quickly into front-line operations. The Ukrainians have made clear the type of gear they need so there should be little doubt as to which gaps Canada can fill."

Ottawa followed its allies on another key move on Tuesday by ordering the children and family members of its embassy staff in Ukraine to leave the country.

"The safety and security of Canadians, our personnel and their families at our missions abroad is our top priority," Global Affairs Canada said.

On Monday, decision by Global Affairs updated its travel advisory warning against non-essential travel to Ukraine, which has been in effect since last week. The advisory now suggests Canadians who are in Ukraine consider leaving.