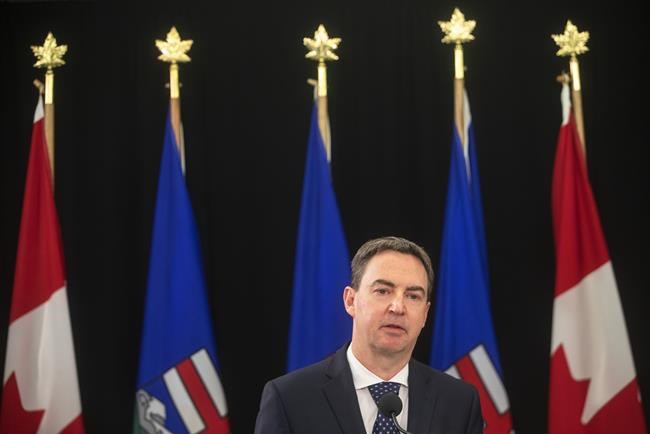 EDMONTON — Alberta Health Services says a patient has died in hospital in Red Deer while awaiting care in the emergency ward.

"The emergency department was fully staffed at the time."

Williamson did not provide further details on the nature of the illness or circumstances of the death at Red Deer Regional Hospital Centre Sunday morning.

He said the medical examiner has been called in and a review is underway.

"We acknowledge that wait times at (the hospital) were long at certain times over the weekend due to a surge in demand, and an increase in very sick patients," said Williamson. "We do not know if this incident was the result of wait times in the Red Deer emergency department.

"AHS is reviewing this incident, including the care provided to this patient and the circumstances of their death."

Health Minister Jason Copping, asked by reporters about the death, said: "My heart goes out to the family and anyone who has passed away in our system.

"I don't have all the details on this. I just heard about it."

Alberta has a record 1,377 people in hospital with COVID-19 and emergency wards are facing long wait times and multiple red alerts, which means no ambulances are available at a given time.

Copping said there's a 30 per cent increase in COVID-19 hospital cases in a week. The test positivity rate remains high at 43 per cent.

Emergency doctors have said patients are being treated in hallways.

Copping said while the Omicron wave of the pandemic appears to be receding, hospitalizations are still expected to increase in the short term due to the time lag between infection and illness.

"Make no mistake, the coming weeks are going to be the toughest yet," he said.

The latest news comes a day after Copping announced measures to free up ambulances and reduce long wait times in hospital emergency rooms due to high COVID-19 caseloads and hospital staff illness.

Copping announced the new measures while confirming reports that emergency services in Airdrie, near Calgary, became so strained last week that one medically fragile boy with a broken leg had to be taken to hospital by a fire truck because no ambulances were available.

"There are more Albertans in hospital with COVID-19 than ever before, and the UCP refuses to take basic measures to slow spread in schools, workplaces, or post-secondary institutions," said Shepherd.

"Frontline health care workers are severely burnt out, exhausted, and short-staffed while we make our way through this fifth wave of the pandemic."

Copping also announced the first shipments of Paxlovid will be available to Albertans starting on Monday.

Paxlovid is the first COVID-19 treatment approved by Health Canada that can be taken orally at home for people who have tested positive.

Dr. Deena Hinshaw, the chief medical officer of health, said the initial batch is limited. It will only be offered for now to those who would benefit the most such as those with immunosuppressive conditions, including transplant recipients and cancer patients.

The medication will only be available by prescription because it can cause side-effects.