It was a big moment in Newfoundland politics on this date in 1996 with former federal MP and cabinet minister Brian Tobin becoming Premier of his home province.  First elected to Ottawa’s House of Commons in 1980, Tobin was re-elected in 1984 and quickly became a well-known critic of Prime Minister Brian Mulroney’s Progressive Conservative government.  Along with Sheila Copps, Don Boudria and John Nunziata, Brian Tobin was part of what came to be known as the ‘Rat Pack’.

With the coming to power of Jean Chrétien in 1993, Tobin was made Minister of Fisheries and Oceans.  In this role he made international headlines during the over-fishing dispute with Spain regarding turbot. In his memorable press conference outside the United Nations, in New York City, he displayed a 16-story European drag net — something illegal in our country — that had been taken off a Spanish ship that Canada had seized for over-fishing off the Grand Banks.

In his characteristic bombastic style, Tobin famously told the world’s media, “We’re down now finally to one last, lonely, unattractive little turbot clinging on by its fingertips to the Grand Banks, saying ‘someone reach out and save me in this eleventh hour’ “.   For this effort, Brian Tobin earned a political nickname: The Turbonator.  (In 1995, during a period of Constitutional strife, he earned another nickname: “Captain Canada”.)

Tobin served for four years as Premier of Newfoundland before he surprised many and returned to federal politics in 2000. Once again, he was named to the Chrétien cabinet, this time as Minster of Industry.  In 2002, citing the need to spend more time with his family, Tobin left politics.  Since then, he has been very successful in the private sector. 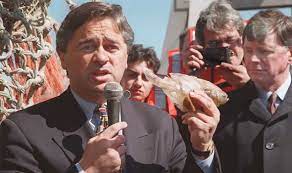