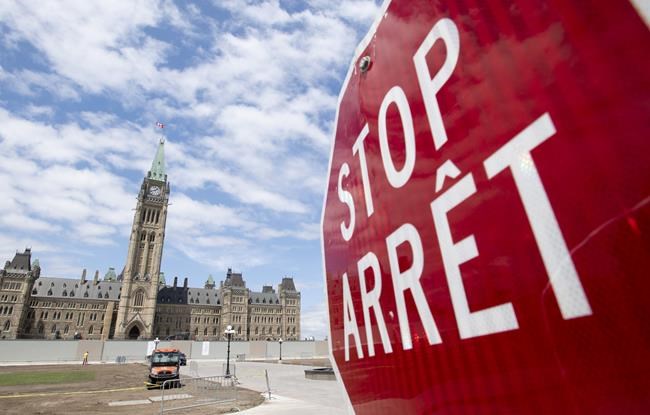 OTTAWA — Security forces on Parliament Hill are preparing for up to 10,000 protesters to set up camp in downtown Ottawa this weekend to push back against lockdowns and vaccination mandates.

A semi-trailer emblazoned with an expletive against Prime Minister Justin Trudeau was spotted already in downtown Ottawa Thursday, but many more vehicles are expected over the next two days.

Their exact number is difficult to measure but Ottawa Police have warned city residents to avoid travelling in the nation's capital over the weekend and to be prepared for delays if they do.

The city's police force also said Thursday it welcomes peaceful protest but not violence or hatred.

"Police and our partners are focused on providing a safe environment for the community and demonstrators," the Ottawa Police Service said in a statement on Twitter.

"We are aware of inappropriate and threatening language on social media related to this event. We welcome peaceful demonstrations. That said, public safety is paramount — there will be consequences for persons engaging in criminal conduct, violence and/or activities promoting hate."

A memo the Parliamentary Protective Service sent to MPs and staff members said it doesn't expect more than 10,000 people at the protest, and that the street running in front of Parliament Hill will be closed to general traffic.

The group billing itself as Canada Unity is demanding that the Governor General and Senate combine forces to order the federal and all provincial and territorial governments to lift any remaining COVID-19 restrictions, waive all fines and cancel "illegal" vaccine passports.

There is nothing in the Constitution affording the Governor General or the Senate the power to take such action.

The protest was spawned after truckers stopped being exempted from the vaccine mandate at the Canadian border on Jan. 15. It means non-Canadian truckers won't be allowed in unless they are vaccinated and unvaccinated Canadians need to quarantine for two weeks after delivering their load.

After some with more extremist views popped up in and around the convoy, lead organizer Tamara Lich asked convoy members not to tolerate violence or vandalism and to report the truck number and licence plate of anyone inciting violence or hatred.

Lich is a member of the Western Canadian Maverick Party, which advocates for greater autonomy for Western Canada or its cessation from Canada.

Trudeau referred to the convoy as a "small fringe minority" at a news conference Wednesday, which spawned hundreds of comments on the Canada Unity Facebook page.

"Good look (sic) on Saturday Justin is all I can say," said someone posting under the group's official account. "You asked for it."

Most responding to the post were angry about the comments and calling on Trudeau to resign, but some threatened violence and others demanded he be arrested and imprisoned.

Conservative MP Pierre Poilievre warned against painting all the convoy participants as extremists just because some in the ranks may be expressing those views.

In an op-ed published by Postmedia news outlets, Conservative Leader Erin O'Toole said he is upset that some want to use the convoy to incite violence.

"To these groups I say: your threats of political violence, hate and bigotry have no place in a free and democratic society," O'Toole wrote. "In fact, you risk hurting the chance for truckers to peacefully protest and have their voices heard."

The Canadian Trucking Alliance has disavowed the protest and said more than 85 per cent of truckers are vaccinated. Many truckers have also posted on social media they are continuing to do their jobs and that the convoy doesn't speak for them.

Ontario Provincial Police spokesman Bill Dickson says the police are monitoring all of the convoys as they travel but will not give any specific numbers because things keep changing.

One group left Thunder Bay, Ont., Thursday morning and was dividing in two about 100 kilometres northeast away at Nipigon. Some were headed to spend the night in Sault Ste. Marie and others in Cochrane.

Police in the Ontario cities of Belleville and Kingston were preparing for another convoy to pass through their cities Thursday, warning the public of road closures to accommodate the group.

This report by The Canadian Press was first published Jan. 27, 2021.