Ottawa, other cities act to rein in escalating protests against COVID-19 measures 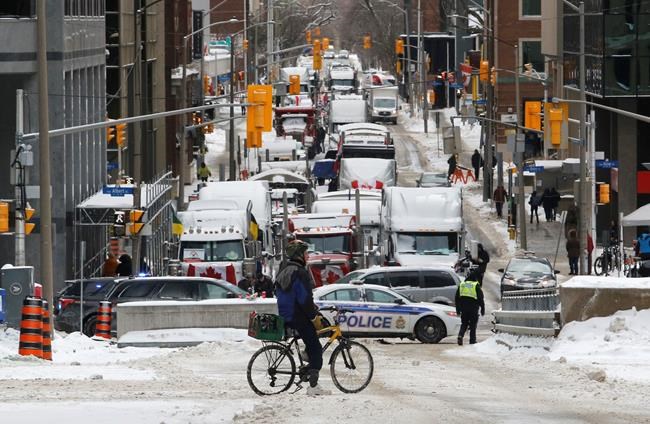 OTTAWA — As counter-protesters prepare to take to the streets across Ottawa and several other Canadian cities Saturday, the battle to end the week-long conflict with protesters opposed to vaccines and other COVID-19 restrictions has moved to the legal arena.

An Ottawa lawyer is to appear before the Ontario Superior Court of Justice to argue a class-action lawsuit on behalf of thousands of city residents seeking millions of dollars in damages and an injunction "prohibiting the continuation of the nuisance."

Ottawa and several other cities across Canada are working to try to ensure that escalating protests against COVID vaccine mandates and other public health restrictions remain peaceful Saturday.

Police in Ottawa have said they are expecting as many as 400 more trucks and up to 2,000 people on foot to arrive this weekend to join the protest that has been rebranded by critics, including a lot of frustrated downtown residents, as an occupation.

Downtown Ottawa residents have endured a week of blaring truck horns, blocked streets and racial taunts from aggressive participants. Many city-dwellers have expressed frustration with the fact little has changed days into the protest, branding it an occupation.

"Everyone expects it to be a nice safe event. However, there still is that underlying danger for any visible minorities, any people in the LGBTQ community," Ottawa resident Mackenzie Demers, a counter-protest organizer, said in an interview Saturday.

"These occupiers, they are dangerous. They have trucks. There are rumors that there are guns."

Ottawa lawyer Paul Champ has filed a class-action lawsuit on behalf of thousands of residents seeking millions of dollars in damages and an injunction "prohibiting the continuation of the nuisance." The statement of claim names protest organizers Tamara Lich, Patrick King, Chris Barber and others as defendants.

Champ is expected to appear Saturday in an online court hearing on behalf of the proposed members of the action – all people who reside in Ottawa from Bay Street to Elgin Street and Lisgar Street to Wellington Street.

"Dear Ottawa residents, you don't have to formally join the truck horn class. If you live in the area, you are automatically members. For those contacting me because they want the area expanded because the trucks are honking there too, we will look at that soon," Champ said in a Saturday Twitter post.

"the incessant blaring of the high decibel air horns and train horns substantially interferes with the private use and enjoyment of the Class Members' homes," the lawsuit's statement of claim reads. "… The conduct is totally unreasonable and unjustified."

It says people have suffered injury and damages for emotional and mental distress; difficulty concentrating; interference with quiet enjoyment of home; headaches; and difficulty sleeping. It is seeking $100 per day for each person that has suffered from the protesters' tactics.

The statement of claim contains allegations that have not been proven in court.

A former Canadian justice minister has urged the city of Ottawa to turn to the courts to seek an injunction against the protesting truckers for the excessive noise they have endured over the course of the week.

Allan Rock, who served for a decade in cabinet under Liberal Prime Minister Jean Chretien, said a court order could empower police to remove the protesters.

"The penalty for disobeying a court order, of course, could be contempt of court. So, I think it's a much more powerful remedy for the police and for the authorities," Rock said in an interview.

"If you disobey that court order, then it's up to the court to decide whether that amounts to contempt. And that could result in a range of penalties, including going to jail."

Ottawa community leaders and residents were also set to march in solidarity with counterprotesters on Saturday. Some residents were ambivalent about whether they would take to the streets or whether it would make any difference.

"I sort of feel that this is a stupid empty futile gesture, and the degradation of our politics has left me feeling dispirited this morning," said Ottawa resident Jeremy Owen, who has organized an online petition calling on Ottawa police to evict the protesters.

Weekend protests in solidarity with those camped out in Ottawa are being organized near provincial legislatures in Toronto, Quebec City, Fredericton, Winnipeg, Regina and Victoria, as well as the U.S. border crossing in Coutts, Alta.

Police forces in those cities say they have learned lessons from Ottawa's predicament and have developed strategies designed to protect key infrastructure, such as vital traffic corridors and hospitals, and also prevent possible violence.

Those strategies have involved significantly boosting the presence of police officers at protest sites, blocking off key access routes and stepping up enforcement of traffic regulations and bylaws regarding excessive noise and other applicable issues.

Meanwhile, crowdfunding site GoFundMe announced Friday it would reimburse or redirect to charities the vast majority of the more than $10 million raised by the demonstrators in Ottawa, saying the event "has become an occupation marked by police reports of violence and other unlawful activity."

Both the Ottawa Police Service and Mayor Jim Watson thanked GoFundMe for its decision, which could deny participants a vital source of money.

But Lich, one of the protest organizers, said in a video Friday that they have a new official donation site, the U.S.-based GiveSendGo, which calls itself a "Free Christian Crowdfunding" website.

This report by The Canadian Press was first published Feb. 5, 2022.