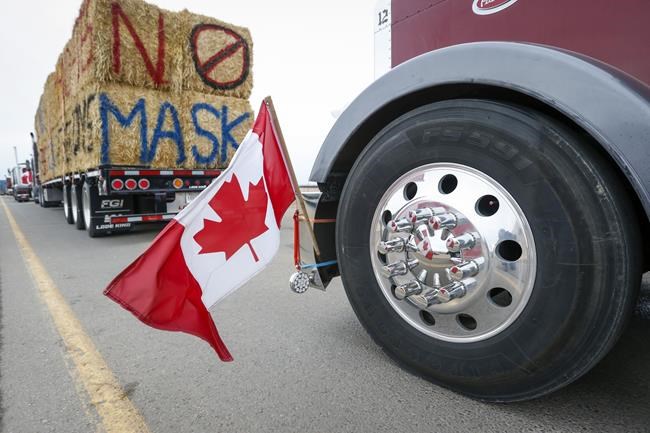 COUTTS, Alta. — RCMP arrested 13 people near the main United States border crossing in southern Alberta on Monday after becoming aware of a cache of firearms and ammunition.

RCMP Supt. Roberta McKale said 11 of the arrests were made in a pre-dawn raid on three trailers in the Coutts area, where a blockade was set up more than two weeks ago to protest a vaccine mandate for cross-border truckers and other pandemic restrictions. She said officers seized 13 long guns, handguns, a machete, a large quantity of ammunition and body armour.

Police had learned of the threat days earlier, she said.

"This was a complex, layered investigation," McKale said.

Names and other information identifying the 11 people were not released. McKale could not confirm whether they were Canadian citizens.

Two additional people were arrested later Monday. Police said one was stopped on the highway while heading back to the protest site, and two weapons were seized.

The other was arrested when a northbound semi truck approached an RCMP checkstop. Police said the driver accelerated and drove toward officers, before swerving at the last minute and hitting some traffic cones on the highway.

On Sunday night, RCMP said a semi and a farm tractor from the blockade worked in tandem to try to ram a police cruiser. The officer was able to avoid the collision and the suspects fled into a crowd of protesters.

"We were able to identify one of the males that was driving one of the vehicles," said McKale. "We know who that person is and we will release information upon that person's arrest." Police are investigating possible charges of conspiracy to commit murder, she said.

And on Monday, a protester in a vehicle burst through a police checkpoint and almost hit an officer on the road.

Premier Jason Kenney said the arrests and the potential for escalating violence were disturbing and should be a wake-up call to protesters at Coutts.

"It should send a message to all of the other folks who were not aware of that (militant) cell," he said at an unrelated news conference in Calgary. "(It's) time to go home. Right now."

RCMP said Monday night that some vehicles had left the blockade on their own, although there were still some at the site.

Kenney said Mounties have told him they will begin to clear the blockade now that the raid is complete.

"The ongoing blockade of our borders and our highways at Coutts will no longer be tolerated."

He noted Mounties said last week they were having trouble finding tow operators willing to remove vehicles from the site.

"Some of the sympathizers and protesters have made threats — I understand sometimes violent threats — to tow-truck and other heavy equipment operators not to co-operate with the police," said Kenney.

"But we have managed to overcome that challenge.

"The government of Alberta has worked hard over the past few days to procure all of the necessary heavy equipment and contractors to operate it."

The Coutts blockade is one of a number of protest demonstrations in Canadian cities and border points that have stalled trade, stranded travellers and disrupted lives of area residents, particularly in Ottawa.

Irfan Sabir, justice critic for Alberta's NDP Opposition, said Kenney has failed to take decisive action to end the blockade, and has tolerated the attendance of fellow United Conservative caucus member Grant Hunter at the protest.

"The UCP's failure threatens jobs and disrupts families. Now we have found out that it also poses a serious threat to the safety of Albertans," said Sabir.

"The UCP has refused to go to court to seek an injunction to disperse the blockade, and refused to exercise its authority over commercial vehicle licences."

— By Dean Bennett in Edmonton

This report by The Canadian Press was first published Feb. 14, 2022.