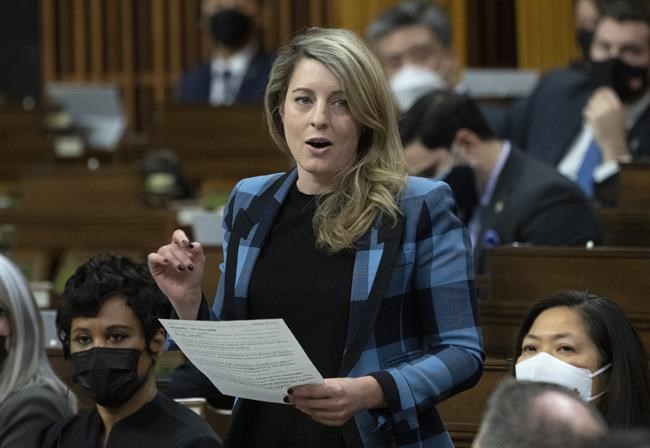 OTTAWA — Canada's foreign affairs minister says the threat of a Russian invasion of Ukraine remains high as cyberattacks undermined earlier optimism Tuesday that the Kremlin might be drawing down its military forces.

"The latest information I have is that the threat is real and imminent," Foreign Affairs Minister Mélanie Joly told The Canadian Press Tuesday. "Everybody's taking this by the hour. Things have been moving; the situation is extremely volatile."

Joly said Canada and its NATO allies want to see actual proof that Russia has reduced its 130,000-strong troop deployment along Ukraine's borders beyond video imagery of Russian heavy artillery being loaded onto transports with no specific details about where that might be happening.

"Weeven think that this could be a campaign of disinformation launched by Russia," she said.

On Tuesday, after a meeting in Moscow with German Chancellor Olaf Scholz, Russian President Vladimir Putin said he doesn't want war and is looking to hold peaceful discussions with the West to ease what has become its worst crisis with Russia since the Cold War.

Putin said he was willing to talk further about limiting the deployment of intermediate range missiles in Europe, and other transparency and confidence-building measures.

NATO Secretary-General Jens Stoltenberg said in Brussels that there were no signs of Russian troop levels dropping on the Ukrainian borders, but there was still reason to be cautiously optimistic about the diplomatic efforts.

Joly spoke shortly after the prospect of a Russian invasion seemed to ease with Putin's latest public remarks.

But then a series of cyberattacks hit Ukrainian government departments and banks, knocking them off-line.

Joly said she was extremely concerned by the cyberattacks and had spoken to her Ukrainian counterpart, Dmytro Kuleba, for more details.

On Monday, Prime Minister Justin Trudeau said Canada would give Ukraine a $500-million loan and $7.8 million worth of lethal equipment and ammunition. Until then, Canada had been reluctant to provide weapons to Ukraine, but Joly said the decision was taken to join other countries in supplying the weapons because of the risk of invasion was so high.

Canada also closed its embassy in the Ukrainian capital of Kyiv, and Joly has urged any Canadians remaining in the country to leave immediately. Canada moved its diplomats to the western Ukrainian city of Lviv.

Joly said she has spoken to her counterparts in Poland, Slovakia, Hungary and Romania to help secure safe passage for all Canadian diplomats and their families should the security situation further decline.

Russia wants guarantees that Ukraine will not be allowed to join NATO, and that the 30-country transatlantic alliance will stop seeking to recruit new member countries from eastern Europe in what the Kremlin views as the former Soviet Union's old sphere of influence.

But the Russian demand to halt further expansion is a non-starter for the U.S., NATO and its allies, including Canada.

Canada, along with several allies including the U.S., Britain, Australia and Germany have finished work on a new package of sanctions that would be levied against Russia if it invades Ukraine again, following its 2014 annexation of the Crimean Peninsula, said Joly.

The sanctions are also structured so they would be rolled out in stages, with an initial round and then a then several follow ups "from day one and then continuing," she said.

Joly also said the Nord Stream 2, a lucrative Russian gas pipeline project that connects to Germany, is on the table as one of the retaliatory economic measures that could be taken against Moscow. About 40 per cent of Europe is dependent on natural gas from Russia, but the Kremlin has cut supplies in the past as a weapon.

Nord Stream 2 is fully constructed but it is not yet operational.

"We know that Europe can be hijacked by Russia, in terms of its own energy supply. But meanwhile, we also know that Nord Stream 2 is not functioning as we speak," said Joly.

"In that sense, Europe has a very important tool to deter Russia to further invade Ukraine as of now because of the fact that the pipeline is not flowing."

On Monday, Finance Minister Chrystia Freeland and her G7 counterparts also warned Russia that any military action against Ukraine would result in sanctions that would "have massive and immediate consequences on the Russian economy."

That followed Sunday's withdrawal of Canadian troops taking part in the NATO training mission of Ukrainian forces. Canada had about 200 military personnel taking part in the mission and had previously announced plans to expand and extend the training effort.

The Defence Department would not say where exactly in Europe the Canadian contingent was being redeployed, citing security reasons, but the move was widely seen as further evidence that a Russian invasion was imminent.

This report by The Canadian Press was first published Feb. 15, 2022.