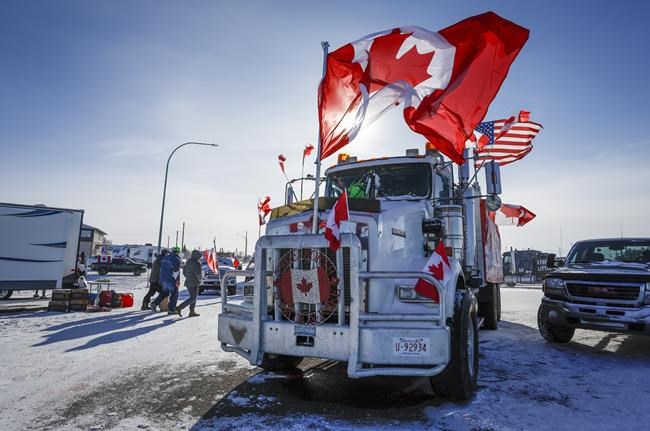 COUTTS, Alta. — A blockade that paralyzed a United States border crossing for more than two weeks ended Tuesday as trucks and other vehicles with horns blaring rolled away from a southern Alberta town.

Protesters had been restricting access to the busy crossing near Coutts since Jan. 29 to rally against COVID-19 vaccine mandates for truckers and broader pandemic health restrictions.

The exodus of vehicles came one day after RCMP arrested 13 people and seized a cache of firearms and ammunition.

"The development with weapons and the personal armour was not associated with us, and to keep that distance we decided to leave peacefully," Marco Van Huigenbos, one of the protest organizers, said as a long line of trucks began to leave.

He said he has no regrets about participating in the blockade.

"I think we've started a movement where people are going to get more involved ... at the municipal level, provincial possibly, but also more involvement in politics in general."

Premier Jason Kenney said Monday the potential for escalating violence was disturbing and should serve as a wake-up call to protesters to go home immediately.

"Glad to see that almost all protesters at the Coutts border crossing and nearby checkpoints have now gone home. This is great news for the hundreds of truckers who cross the border every day."

There was celebrating when the protest started winding down late Monday. A video posted to social media showed RCMP members shaking hands and hugging protesters. In the background, people holding hats or hands to their chests or with arms draped across each other's shoulders sang O Canada.

Cpl. Gina Slaney confirmed the scene was from Monday night in Coutts.

Jim Willett, mayor of the village of 250 people, said it's been a long time since he has seen anything but semi-trailers on Highway 4.

"I can see all the way to Regina," he said with a laugh Tuesday.

"I'm optimistic now and we're on to the next phase, whatever that may be. We had no problems with anyone in town. It was just like having a population three times of normal."

Willett, who contracted COVID-19 a week ago, said he doesn't blame the leaders of the blockade for the cache of weapons found.

"They were a well-behaved bunch of people to be occupying our town, and I think the organizers were taken aback as much as we were by what the RCMP discovered."

The number of protesters at a police checkpoint, north of Coutts, had dwindled and work was underway to start clearing away a first-aid trailer, a sauna and electric generators.

"Last night, emotions were high ... I think a lot of people felt that we were giving up, but we're not giving up," said John Vanreeuwyk, a feedlot operator from Coaldale, Alta., also a protest organizer.

If truck drivers had decided to stay longer, other protesters would have stayed too, he said.

"Is it a victory? No. A victory means we're done. This has gotta carry on until the problems are resolved.

The blockade was one of several demonstrations in Canadian cities and border points that stalled trade, stranded travellers and disrupted lives of area residents, particularly in Ottawa.

Deputy Prime Minister Chrystia Freeland has said $48 million in trade was lost each day that the Coutts border was closed.

This report by The Canadian Press was first published Feb. 15, 2022.