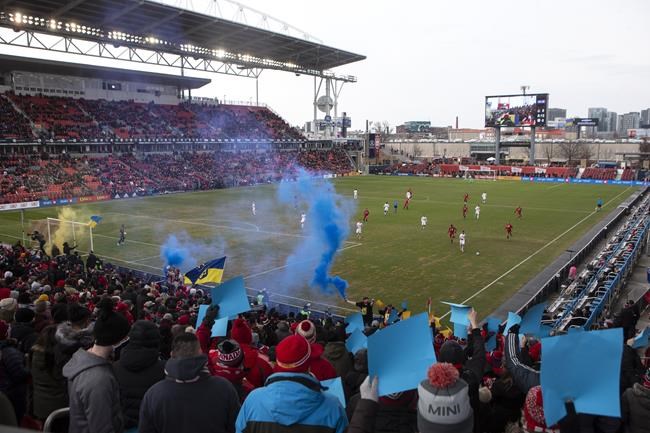 TORONTO — "Stand With Ukraine" was the message on the BMO Field video board before Toronto FC's home opener against the New York Red Bulls on Saturday.

Several Ukraine flags were attached to the south stand of the lakefront stadium. The PA announcer also asked the crowd to join in a "moment of reflection" on Ukraine, which finds itself at war after being invaded by Russia.

Toronto coach Bob Bradley said the situation in Ukraine had been a talking point within the team.

"When you have players from different backgrounds, when you look around the world, you have compassion for situations that are so sad and tragic," Bradley said this week. "And so when you look at the people in Ukraine, when you see mothers leaving with children, the fathers are staying behind to fight … You always know there's threats around the world but to see what's happening now and why it's happening, it's tragic, it's really sad."

MLS, meanwhile, announced that it and its clubs will make donations to the Canadian Red Cross and UNICEF USA "to support humanitarian aid to children and families affected by the crisis in Ukraine." They will also use their digital, broadcast, in-stadium platforms to help raise awareness and funds for relief efforts.

Football in many parts of the globe has expressed its support for Ukraine and condemnation of the invasion by Russia.

English Premier League captains wore yellow and blue armbands in Ukrainian colours on the weekend with stadium video screens displaying “Football Stands Together” against the backdrop of the Ukrainian flag.

Manchester City players wore "No War" shirts on top of their training gear and displayed the Ukraine flag before their recent game against Everton. City's Oleksandr Zinchenko and Everton's Vitaly Mykolenko are both from Ukraine.

Chelsea captain Cesar Azpilicueta and Liverpool skipper Jordan Henderson carried wreaths in the yellow and blue colours of Ukraine when they took the Wembley pitch for the recent Carabao Cup final.

Manchester United, Everton, Germany's Schalke 04 are among teams that have cut ties with Russian sponsors. EA Sports has removed all Russian clubs and the national team from its popular FIFA video game.

Closer to home, the Vancouver Whitecaps urged fans to wear blue and yellow in support of Ukraine for their home opener Saturday against defending champion New York City FC. The Whitecaps also promised to make a donation to the Canadian Red Cross Ukraine Humanitarian Crisis Appeal on behalf of everyone who attends the match.

This report by The Canadian Press was first published March 5, 2022