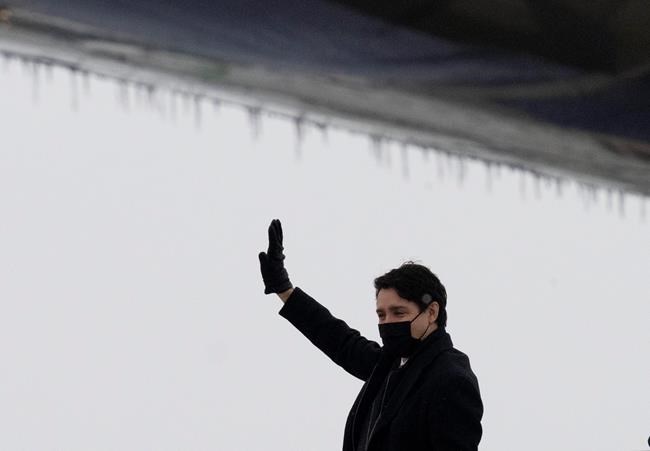 LONDON — Canada poked Russia in the eye on Monday by sanctioning 10 people identified by Vladimir Putin's top domestic opponent as the federal government works with allies to hammer Russia's economy in response to that country's invasion of Ukraine.

But Prime Minister Justin Trudeau, in London at the start of a four-country visit to Europe, conceded cutting off Russia's lucrative oil and gas exports entirely is not as simple for Europe as it was for Canada.

Trudeau, his British host Boris Johnson and their Dutch counterpart Mark Rutte did their best to project solidarity with Ukraine in the face of the unrelenting Russian invasion.

Trudeau added 10 names to the growing list of Russians on Canada's sanctions list — people whose assets in Canada are frozen and with whom Canadian financial institutions can no longer do business.

This time, Trudeau said the names of former and current government officials, oligarchs and supporters of Putin, "come from a list compiled by jailed opposition leader Alexei Navalny."

The three leaders chose a historic setting to kick off their talks: the Royal Air Force Station Northolt outside of London, which played a key role in the Battle of Britain that ultimately saved the island nation from a Nazi Germany bombardment in Second World War.

But Canada, Britain and their NATO allies are not keen to repeat the history of that great air battle any time soon. They have rejected desperate Ukrainian pleas for a no-fly zone to protect their civilians from Russian bombardment because they fear it could start a new world war if they engage with Russian planes.

They are instead taking a sledgehammer to the Russian economy and to the personal wealth of oligarchs with heavy influence in the government, hoping it will devastate Putin's ability to fund his invasion and convince his inner circle to pressure him to end the war.

Trudeau said the unity of the approach surprised Putin. But that unity is being tested when it comes to Russian oil and gas. Ukraine's Foreign Minister Dmytro Kuleba said over the weekend there needs to be even more sanctions, including stopping the flow of oil and gas out of Russia.

But Europe is much more reliant on Russia for its energy supply. Rutte said the "painful reality" is that the continent is "still very much dependent on Russian gas and Russian oil" and that cutting it off full stop would have "enormous ramifications" both in Europe and around the world.

"So we have to dramatically reduce our dependency on gas and oil from Russia. That will take time," Rutte said at a joint news conference with Trudeau and Johnson at 10 Downing Street.

Trudeau said many countries are realizing they can't rely on Russia at all anymore and he's heard from several European leaders that they will move away from Russian oil.

He said Canada will be there to support that.

Canadian Conservatives have called on Ottawa to do more to get Canada's oil and gas to Europe, including restoring debate about building a new pipeline from the energy-rich Prairies to the East Coast. Trudeau did not say whether Canada's support would include attempting to supply Europe's energy itself.

The three leaders also acknowledged the need to increase defence spending in response to both Russia's actions and growing instability around the world.

Asked whether Canada would increase its spending to meet NATO’s two per cent of GDP target, as Germany has recently announced, Trudeau noted that his government has previously promised billions of dollars for the Canadian military.

But the prime minister also acknowledged the world has changed since his government released its defence policy in 2017, and that more may be needed.

Trudeau also had an audience with the Queen at Windsor Castle Monday. This was the Queen's first in-person audience with a leader since she tested positive for COVID-19 on Feb. 20. Trudeau said she was very insightful as they discussed the current global situation.

"I’ve had the particular privilege of having known Her Majesty 45 years," said Trudeau, who first met the Queen as a child with his father, former prime minister Pierre Trudeau. The current prime minister said she was "very interested in what's going on" and that he found their conversation "really useful."

Trudeau is now in Latvia, where tomorrow he will meet with NATO Secretary-General Jens Stoltenberg. He will also visit the Latvian military base where hundreds of Canadian Forces personnel are contributing to Canada's leadership in that country of NATO's long-standing deterrence mission to bolster its eastern European flank against Russia.

Later this week he will have meetings in Warsaw, Poland, and Berlin. Deputy Prime Minister Chrystia Freeland will join him in Germany.

This report by The Canadian Press was first published March 7, 2022.