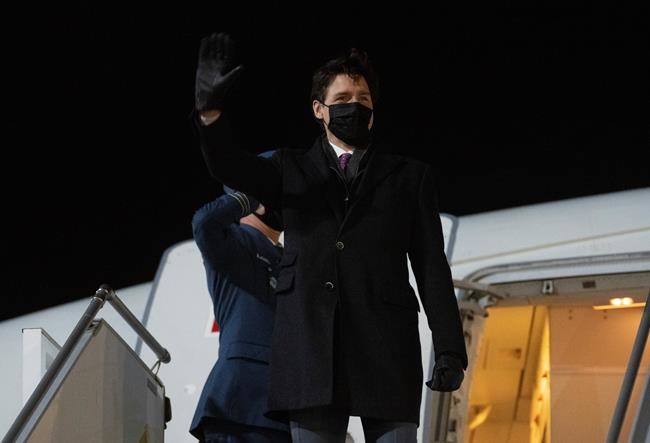 ĀDAŽI, Latvia — Prime Minister Justin Trudeau promised Baltic leaders Tuesday that Canada will stand with them to fight the Kremlin's war on Ukraine and its cyberattacks on their countries.

Trudeau is in Latvia where he met privately with Prime Minister Krišjānis Kariņš, followed by an expanded session via teleconference with leaders from Estonia and Lithuania.

"You are literally on the front lines of this challenge with Russia," he said.

Russia's invasion of Ukraine is now in its 13th day. Trudeau said Russia has "weaponized" misinformation not only against Ukraine but in all "democracies around the West."

"Quite frankly, you have been living not just with the military threat, not just with the history of occupation … but also, the daily use of propaganda and disinformation to try and undermine the democracy and the values you have," Trudeau said.

He later visited the Ādaži Military Base with NATO Secretary-General Jens Stoltenberg. The base, northeast of Riga, is where NATO troops are stationed in a mission led by several hundred Canadians.

They were joined by Defence Minister Anita Anand, Spanish Prime Minister Pedro Sánchez, and Canadian defence chief Gen. Wayne Eyre for a tour of a massive battlefield scattered with a dozen heavy tanks and artillery pieces.

They met Canadian troops and their allies that had been war gaming live combat exercises for the last eight days.

"It shows the unity of the world standing together," Trudeau told a group of Canadian troops, clad in combat fatigues and green face paint.

"Having a whole bunch of flags beside each other in the field" is a challenge, he added, but he praised the soldiers for setting an example for the world by working so well with their allies.

Navigating dirt that was a times ankle deep, the entourage visited with soldiers from the 10 NATO countries that are stationed here.

"They see renewed purpose. It's the front line of freedom," Eyre said.

Trudeau asked questions of a Latvian commander from a hilltop bunker that overlooked the massive plain of rutted dirt.

Canada leads the NATO battle group in Latvia, which is part of NATO's long-standing deterrence efforts against Russia — a mission that taken on new significance in light of the Russian invasion.

It is one of four such efforts in the Baltics and Poland, designed to demonstrate the strength of the NATO alliance in the region against Russia.

Putin takes great offence at the NATO buildup on his country's borders. He has opposed NATO’s expansion into countries that were once in the sphere of the former Soviet Union.

Ukraine is not a NATO member but was seeking membership in the 30-country transatlantic alliance as well as closer ties with the European Union. Russia annexed Ukraine's Crimean Peninsula in 2014 after the overthrow of the Kremlin-backed administration in Kyiv.

That marked the most significant breach of Europe's borders since the Second World War — a milestone now eclipsed by Russia's invasion of Ukraine.

Trudeau said the ongoing show of unity among NATO allies and other democracies to back Ukraine is a critical part of bringing the crisis to a close.

Trudeau told the Baltic leaders that Canada has the third largest population of Ukrainians in the world after Ukraine and Russia, "so we are deeply, deeply troubled and engaged by this conflict in Ukraine."

"We are demonstrating that, unlike what Putin thinks or mistakenly thought, democracies can and will defend not just themselves and their territory, but the principles and rules and the values that actually make us successful," Trudeau said.

His arrival in Riga came after a daylong visit to the United Kingdom for meetings with Prime Minister Boris Johnson and Dutch Prime Minister Mark Rutte. He is also to visit Poland and Germany later this week.

This report by The Canadian Press was first published March 8, 2022.