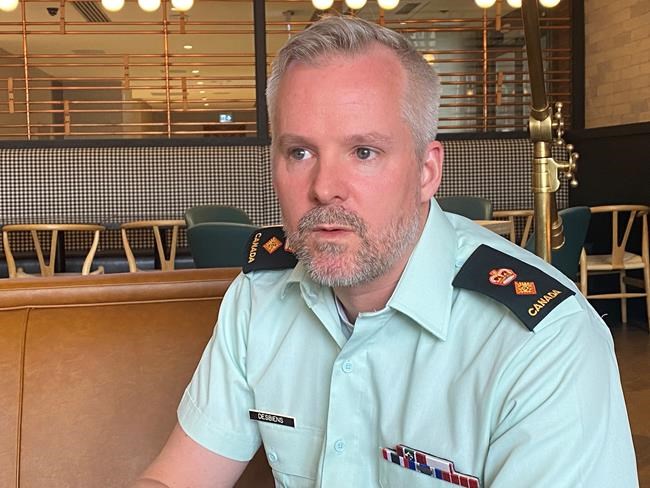 CALGARY — A Canadian military official says the war over Ukraine is being fought on two fronts — armed conflict and disinformation.

Desbiens, who has been stationed with Canada's 500 troops in Latvia for the past four years, says he has been studying ways to counter the "informational warfare" that Russia has been using successfully for several years.

Russia is refining its tactics when it comes to disinformation, Desbiens said in an interview with The Canadian Press while in Calgary on Tuesday.

"We need to get better ... we need to track this much faster and to adapt to their patterns. Once we adapt, we can take proper action to minimize the damage it will do."

"They thought that they would sow division within NATO and clearly the outcome is NATO has come together to a level that we haven't seen in years."

Desbiens, who has also been working with the NATO Strategy Communication Centre for Excellence, said he didn't see the invasion of Ukraine coming since there had been conflict in the country for years.

Russia traditionally follows a pattern of "hybrid warfare," including the use of internet bots and troll farms to influence the economy, politics and culture, he added.

"They're rewriting history," he said.

Canada leads the NATO battle group in Latvia, part of its long-standing deterrence efforts against Russia — a mission that has taken on new significance in light of the invasion of Ukraine.

It's one of four such efforts in the Baltics and Poland designed to demonstrate the strength of the NATO alliance in the region against Russia.

Desbiens said Russians are targeting the Russian-speaking population in Latvia, Poland and the other Baltic states hoping to garner support. It's becoming harder, he said, because many nations are taking action to limit the spread of disinformation.

Ukraine learned from 2014 when Russia annexed the Crimean Peninsula and from the overthrow of the Kremlin-backed administration in Kyiv, he added.

"Information-wise, I think the Ukrainians were much better prepared than Russia thought they would be. They're actively communicating, reporting on all fronts and Russia certainly didn't see that in 2014," he said.

"The ultimate goal for any government and any army is to avoid thatsteel-on-steel conflict. You don't want to come to this if you can achieve your end goals by not going to war."