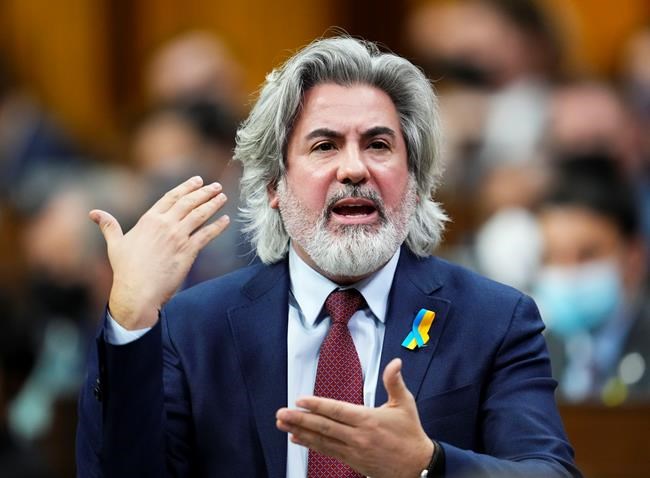 OTTAWA — Communications giant Rogers has suggested that Canada ban all broadcasters run or controlled by regimes the country has sanctioned, including state-owned Russian channels.

The company's recommendation would mean banning not only Kremlin-controlled broadcaster RT from Canada's airwaves but others including Channel One Russia and RTR Planeta.

Rogers made its suggestion in a formal submission to the Canadian Radio-television and Telecommunications Commission, which is carrying out a speedy inquiry into whether RT should be banned from Canada's airwaves.

Prime Minister Justin Trudeau asked the CRTC to review whether the broadcaster should be banned after Russia invaded Ukraine and Canada imposed a raft of sanctions on President Vladimir Putin's regime.

RT, formerly Russia Today, is a state-funded channel that broadcasts in several languages to international audiences. It has faced a barrage of criticism worldwide for spewing out Kremlin-controlled propaganda about the invasion of Ukraine.

Rogers, Bell, Shaw and other Canadian broadcasters have already removed RT from their lineups, with Rogers replacing the channel with the image of a flying Ukrainian flag.

Heritage Minister Pablo Rodriguez called on the CRTC to complete its assessment within two weeks. In a tweet last month he applauded Telus for joining other Canadian broadcasters in "giving RT the boot" from its lineup of channels.

Most public submissions to the CRTC consultation, which finished Tuesday, favour banning RT from Canada, with many condemning it as a propaganda vehicle for Putin.

But some people told the CRTC that Canadians should be able to subscribe to the Russian channel to get a different viewpoint on the invasion of Ukraine.

Rogers called for Canada to ban any programming service that is either owned or controlled by a state that is subject to Canadian sanctions or by any individual or entity named in special economic measures against Russia.

Since Russia invaded Ukraine, countries around the world, including the United States and United Kingdom, have taken action to remove RT from the airwaves.

Channel One is a popular state-controlled Russian broadcaster. According to the BBC, it this week suggested that reports of Ukrainian forces destroying Russian military hardware were fake and designed to mislead inexperienced Russian viewers.

Several people who made submissions to the CRTC on RT wanted a more widespread ban on Russian broadcasters as well as a crackdown on social media.

One submission by an Ontario university professor said it is "entirely inappropriate" for Russian state-owned or controlled media to broadcast in Canada.

"I strongly support the removal of RT and all other Russian state media from Canadian airwaves and the internet in Canada."

The submission also called on the government to block all the websites and social media accounts of the Russian state media.

The deadline for the public to give views on whether to ban RT was on Tuesday. It is expected to make its decision within the next two weeks.

The CRTC said in a statement that public participation in commission proceedings is a key element of its decision-making process."

"The CRTC will review all interventions received and weigh them accordingly," the statement said.