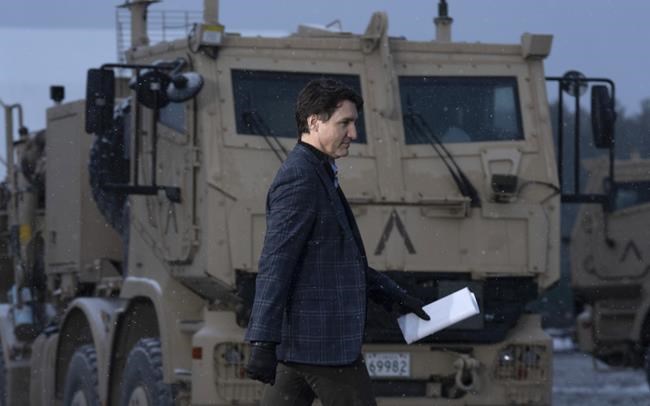 In The News is a roundup of stories from The Canadian Press designed to kickstart your day. Here is what's on the radar of our editors for the morning of March 9 ...

What we are watching in Canada ...

Prime Minister Justin Trudeau is in Berlin today for private meetings with German Chancellor Olaf Scholz as the NATO alliance continues to pressure Russia to end its illegal invasion in Ukraine.

It is the first time Trudeau and Scholz have sat down in person since Scholz replaced longtime chancellor Angela Merkel in December.

Their meeting comes 14 days after Russian troops began pouring into Ukraine in an invasion the Office of the United Nations High Commissioner for Human Rights says has now killed more than 400 civilians.

The discussions will likely include military spending and energy security.

Scholz said last month Germany would finally increase its military spending to hit the two per cent of GDP target NATO allies committed to eight years ago and Trudeau is under pressure to follow suit.

Germany and Europe are also looking for alternative sources of oil and gas to cut their dependence on Russian fossil fuel exports.

A Canadian military official says the war over Ukraine is being fought on two fronts — armed conflict and disinformation.

Desbiens has been working in Latvia for the past four years and says Russia has a set pattern of how it operates its propaganda.

He says it involves influencing the economy, culture and public opinion, and it has proven to be effective.

But Desbiens says this time Russia has failed to sow any discontent among NATO members, which remain more united than they have been for years.

He also says Ukraine appears to have learned from the 2014 Russian annex of the Crimea, and is better prepared and informed.

However, Russia has also been aiming its message at Russian-speaking people in a number of the Baltic states, including Latvia, as well as Poland.

An independent Ontario legislator, who rose to prominence for speaking out against COVID-19 lockdowns, says he will run for Conservative leadership.

Roman Baber will launch his campaign Wednesday evening, and says he considers himself to be the underdog in the party's contest, competing against well-known federal Conservatives like Pierre Poilievre and Leslyn Lewis.

Baber sits as an Independent MPP for the Toronto riding of York Centre after Ontario Premier Doug Ford booted him from his Progressive Conservative government in January 2021 over publicly calling for an end to the lockdown that was in place at the time to stem the spread of COVID-19.

He was also barred from running for the party in Ontario's election in June.

Both Poilievre and Lewis have been opposing vaccination mandates and health restrictions that shutter business and force residents to stay inside, but Baber says what sets him apart is the fact he did so first.

Baber says he believes lockdowns will be remembered as a failure of public policy and sees the pandemic response as tied to "cancel culture and political correctness."

GRAND RAPIDS, Mich. _ Opening statements are set to begin today in the trial of four men who prosecutors say plotted to kidnap Michigan Gov. Gretchen Whitmer in 2020 because they were angry about pandemic restrictions she imposed.

Prosecutors have said they will present secret recordings of the men discussing the plan and other evidence, including that they surveilled Whitmer's vacation home and conducted training with weapons.

Defense attorneys say the men deny any conspiracy to kidnap Whitmer. They have signalled an entrapment defence, criticizing the government's use of undercover FBI agents and confidential informants.

Conference tables along one wall of the wood-panelled courtroom, crowded with different teams of defense lawyers and aides, are one indication of the complexity of the case jurors must sit through for then next few weeks. The strategies of the different defense teams are not perfectly co-ordinated, so defense lawyers could often make different objections or motions, or ask questions during cross-examination seeking to score different points with jurors.

Prosecutors say the men _ Adam Fox, Brandon Caserta, Barry Croft Jr. and Daniel Harris _ came up with the plan to snatch Whitmer in 2020, when stay-home orders were in place and the economy was restricted. They're accused of taking critical steps over several months, including secret messaging, gun drills in the woods and a night drive to northern Michigan to scout her second home and figure out how to blow up a bridge.

At the time, Whitmer was trading taunts with then-President Donald Trump over his administration's response to COVID-19. Her critics, meanwhile, were regularly protesting at the Michigan Capitol, clogging streets around the statehouse and legally carrying semi-automatic rifles into the building.

The FBI said it thwarted the kidnapping plot with the arrests of six men in October 2020. Two of them, Ty Garbin and Kaleb Franks, have pleaded guilty and will appear as crucial witnesses for the government, giving jurors an inside view of what was planned. The two insist no one in the group acted because of excessive influence by agents or undercover informants.

Garbin said Fox, the alleged ringleader, wanted the men to chip in for a $4,000 explosive large enough to destroy a bridge near Whitmer's home and distract police during a kidnapping.

What we are watching in the rest of the world ...

LVIV, Ukraine_ Ukrainian forces were bolstering defences in key cities Wednesday as Russia's advance faltered amid fierce resistance in some areas, the general staff of Ukraine's armed forces said, while the strategic port city of Mariupol remained encircled as a humanitarian crisis grew.

Across the country, thousands of people are thought to have been killed, both civilians and soldiers, in nearly two weeks of fighting. Russian forces have seen their advances stopped in certain areas _ including around Kyiv _ by fiercer resistance than expected from the Ukrainians.

Ukraine's general staff said in a statement that it was building up defences in cities in the north, south and east, and that forces around Kyiv are resisting the Russian offensive with unspecified strikes and "holding the line.''

The trilateral meeting was to take place on the sidelines of a summit being hosted by Turkey, a NATO member nation, but no further details were announced.

In Kyiv, back-to-back air alerts Wednesday morning urged residents to get to bomb shelters as quickly as possible over fears of incoming Russian missiles. An all-clear was given for each alert soon afterward.

More than two million people have now fled Ukraine, according to the United Nations.

Liu, who shot to global fame with "Shang-Chi and the Legend of the Ten Rings'' after appearing on CBC's "Kim's Convenience,'' co-created "Hello (Again)'' with Toronto-based writer Nathalie Younglai.

The duo also co-wrote the first four episodes together. There are nine 10-minute episodes.

Directed by Melanie Chung, the show stars Alex Mallari Jr. as a line cook named Jayden, and Rong Fu as an emergency room resident, Avery, who meet, quickly fall in love and eventually break up.

Six months later, Jayden finds himself travelling back in time to when he met Avery, when he must either fix his past mistakes and win her back or let history repeat itself.

Liu, who can next be seen hosting the Juno Awards in May, also serves as executive producer alongside Younglai and Mallari Jr.

Did you see this?

VANCOUVER _ Chip Wilson, the founder of athletic wear firm Lululemon Athletica, said he once considered himself invincible but is now cautious even about turning over in his sleep in case his shoulders dislocate because of a rare genetic disorder.

Wilson, 66, is starting a venture called "Solve FSHD'' and contributing $100 million to help find a cure for the condition by the end of 2027.

He was diagnosed at 32 with facioscapulohumeral muscular dystrophy, which leads to weaknesses in the face, around the shoulder blades and upper arms.

"There's nothing holding my shoulders together and the pain is quite extraordinary,'' Wilson said in an interview Tuesday. "I get pinched nerves in the back. Ultimately, once a person gets into a wheelchair, a person is highly compromised -- that would be a big concern.''

Wilson said he didn't pay much attention to his diagnosis until he was travelling back from China on a business trip several years ago and fell in the airport.

He said he expects he will not be able to walk without help in eight years and 40 per cent of the muscles in his body have deteriorated or turned to fat, affecting his day-to-day life.

The investment will focus on both finding a cure for facioscapulohumeral muscular dystrophy type two and a way to build back muscles.

Wilson said he hopes the research could add 10 to 15 years to the lifespan of older people by curbing muscle degeneration.